It's the Devil's Fault

Let’s see what excuse the Rev. Ted Haggard will use for his reason for engaging in homosexual sex with a paid prostitute for the past three years pitching his fire-and-brimstone against gays from the pulpit: 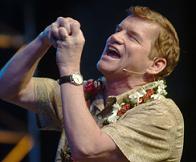 Alcohol: This is the usual stand by excuse. If this is used expect rehab to be next up,

Satan: The devil made him do it.

Haggard supported an amendment to Colorado’s Constitution banning same-sex marriage, on which Coloradans will vote next week. He told a news outlet that the accusations might have been politically motivated. Isn’t that what all the Republicans and hypocritical clergy say?
Posted by The Misanthrope at 12:14 AM

Or maybe the Democrats made it up to take the focus away from John Kerry.