Rocky Balboa is Back
and Older than Ever

I want to keep fighting because it is the only thing that keeps me out of the hamburger joints. If I don’t fight, I’ll eat this planet.
George Foreman, boxer

I had to put the Sunday paper down and this short post when I saw an ad for the new Rocky Balboa movie. I was thrilled to see that Rocky Balboa gets into the ring of the head of AARP to 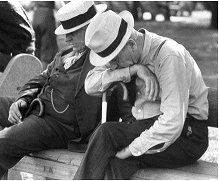 knock the snot out him for violating privacy laws to send people invites to join their old people club.

I suspect it will be a twelve or fifteen rounder considering how old our heroic boxer is now.
Posted by The Misanthrope at 10:06 AM

Well if Muhammed Ali could come out of semi-retirement so can Stallone I suppose, right?:)