Prepare for Take off...

I have found out that there ain’t no surer way to find out whether you like people or hate them than to travel with them [or among them].
Mark Twain (1835-1910, author

I have returned from the big apple and I’m glad to be back on my coast. It’s is the getting from one coast to the other that is problematic. Of course, an Arctic front passing through only serves to complicate issues. 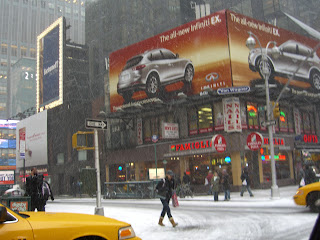 Before I start the story of my journey, I had the pleasure of meeting Alice from Through the Looking Glass Sunday evening. From my perspective, we hit it off immediately. I loved her New York sense of humor, as my wife would call it. She is sarcastic, caustic, and funny. I met her at her place, in a very nice area of the island and we walked across the street to a fabulous French restaurant. After dinner we went back to her place and chatted some more until I looked at my watch and realized it was nearly midnight and I had to be at work the next morning. The temperature was in the teens or lower, and lower still with the whipping wind. I was concerned about catching a cab from Alice’s quiet neighborhood, but it proved to be no problem. I was afraid with my California coat I would be found dead from hypothermia with my arm in the raised position for hailing a cab. 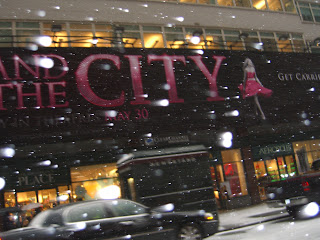 Monday was work and a delightful dinner in the evening. Tuesday was work half the day and the other half of the day and well into the day spent attempting to get home. My co-worker and I, left the meeting at 2:30 to await our flights, mine at 5:20 on United to LAX. His flight on American Airlines was set to leave at 7:30 p.m.

Mr. Toad’s Wild Ride was tame compared to the cab ride to JFK. It was now snowing and the freeways and side roads were not just jammed, but stopped. Our driver kept turning and twisting down every side street, which truly prolonged our drive. It took two hours from Manhattan to JFK. Surprisingly the TSA people at the airport were rather pleasant now that most everyone realizes that Bin Laden has changed our airport experience permanently.

The plane was packed. A mother with her infant child was only a couple of rows away, yet I was not concerned as I had my Bose headphones and iPod that cancel all surrounding noise. However, it did nothing about the young lad with the pungent garlic breathe, who kept leaning over me to view the snow covering the wings of our plane. His mother and sister had the two seats across from us, but he must not have flown much because he didn't realize he could move to fill the third seat and grace them with his presence and remnants from dinner. I asked the stewardess to let him know that he could sit with his family, which upon receiving this official notice he immediately did so. My good deed for the evening accomplished. 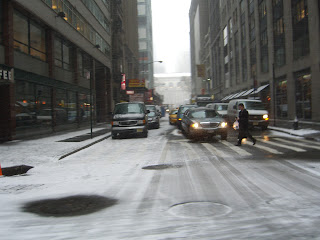