High water risin', six inches 'bove my head
Coffins droppin' in the street
Like balloons made out of lead
Water pourin' into Vicksburg, don't know what I'm going to do
"Don't reach out for me," she said
"Can't you see I'm drownin' too?"
It's rough out there
High water everywhere
Bob Dylan "High Water (for Charley Patton)"

I was listening the Bob Dylan song “High water” with the chorus “High water everywhere,” and it dawned on me that what Bush the Decider, the Jr., and the worse president since Hoover has done for this country what he has done for New Orleans. He is running around now giving interviews in essence telling the country that his administration has done a heck of a job. They sure have! So as Bush ends his whitewashing tonight with a speech to the nation and pardons all his cronies Tuesday morning, let’s recap why the country is counting the minutes until Tuesday noon. 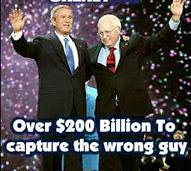 Posted by The Misanthrope at 3:22 PM