Watching the festivities surrounding the inauguration of President-elect Barack Obama one gets to see real patriotism, which is a pride for one’s country, not a blind following of a leader whether he is right or wrong.

There are a lot of expectations surrounding the 44th president of the United States because of the disarray this country has been left. However, I feel people (except for the extremes on the right and left) will provide him the leeway to get things done because there will be a sense of doing the right thing as opposed to being forced with secret plans, employing contradicting presidential orders while signing bills, and less than honest agendas.

I feel a new sense of patriotism that I have not felt in at least six years. 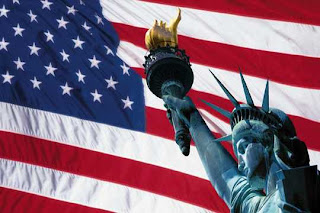 Posted by The Misanthrope at 10:25 AM

It's nice to be so proud and excited about the future of our country.

ecrunner said...
This comment has been removed by a blog administrator.
4:48 PM

B2, it is indeed. I also think I may be surprised that Bush won't pardon Libby.