What is written about a person or an event is frankly an interpretation, as are handmade visual statements, like paintings and drawings. Photographed images do not seem to be statements about the world so much as pieces of it, miniatures of reality that anyone can make or acquire.
Susan Sontag (1933 – 2004) author, literary theorist, and political activist from, "On Photography" 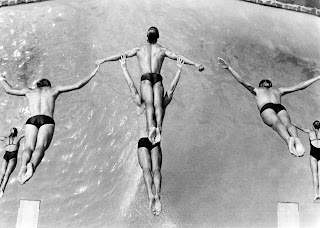 If I could have a second career it would be as a photographer. Granted, I am coming upon it a bit late, but I thoroughly enjoy it. Oh, I could put on my résumé that I was an official photographer and that I had photos published in newspapers around the country, picked up by Associated Press, The National Enquirer, but I just took it in stride being the official photographer for a major amusement park. I photographed Elton John, Rolling Stones’ keyboardist Ian McLagan, who was on ’81 tour; a runaway bear dragging its trainer on the ground; high divers; Michael Jackson wearing a Groucho Marx mustache and glasses while watching the Temptations; and various other miscellanies around the park. Sadly, I cannot find many of the photos, if I ever had them, but I did get a few good shoots. Still, I never viewed myself as a photographer. 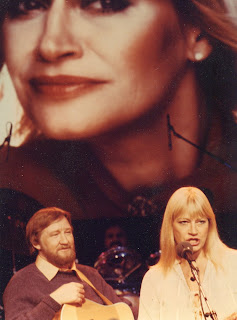 (Mary Travers circa. '81 photo by RJW)
Photographers know what they were doing; know how to develop film, know how to mix chemicals make the photos highlight key aspects of the picture, and know lighting and exposure settings. Me, I would, and still do, take numerous photos hoping that one of the photos on the contact sheet spying it through a photographer’s loop would turn out once I sent it out to be developed.

However, today, I have a greater appreciation of the art of photography and realize how little I know, and today the camera is almost idiot proof and has so many features that you can experiment and even take pictures of something photographed numerous times and still eke out something original. Because I have the Toner Mishap soapbox, I can share my amateur photos with the world and I will as times goes by.

Thank you for your indulgence. 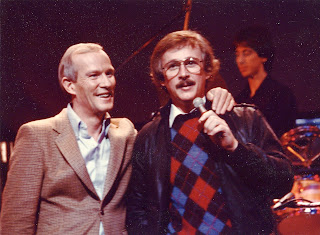 (Smothers Brothers, Tommy and Dick circa. '81, photo by RJW)


by RJW
Posted by The Misanthrope at 3:05 PM

It is never too late to start over, er again.;)

I agree, and never say never. Is there really a picture of me in an amusement park from the 1981 tour? Like to se it, All the best, Ian McLagan - mac@macspages.com

Information from this blog comes in handy to freshen up on your photo knowledge.

The divers shot is great! And is that really Ian McLagan reading our blog?!?

On the Mark says: Great photo of the high divers. Where were you standing? Was it published?

Jack, I agree, but financially it's difficult, but slowly I will work my way into something.

IM, Wow, if you are really he, I sent you a personal note via facebook. I will look for those photos. You were at the park with the tour manager, Jade Jagger and several others.

B2, OTM, Thank you. The diving platform had multiple boards and I inched out over the board to take pictures of them doing their dives. Big surprise, but that was a staged photo. The photo was picked up my medium- to small-sized newspapers around the country. I know this because we used a clipping service.