"Music, in performance, is a type of sculpture. The air in the performance is sculpted into something."
Frank Zappa (1940 – 1993), composer, electric guitarist, record producer, and film director

I am still in awe of the Crosby, Stills & Nash concert at the Greek Theater on Saturday, Oct. 3; those three men are incredibly talented singers, songwriters, and musicians. There is something about their three-part harmony that has a calming effect. The trio entered the stage to a standing ovation. Forty years ago they played the Greek for a seven-night, sold-out engagement. Graham Nash referred to the difference between now and then stating that there was no one in the trees this time around. 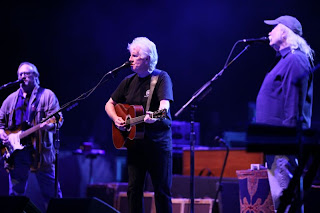 The show opened with “Helplessly Hoping” and “Wasted on the Way.” In the early going of the nearly two-and-a-half-hour concert David Crosby told us they were going to experiment and play some of their favorites by other artists that may appear on a new CD they are working on. The covers set started with the Rolling Stones’ “Ruby Tuesday,” and included James Taylor’s “You Can Close Your Eyes,” Bob Dylan’s “Girl from the North Country,” Allman Brothers’ “Midnight Rider,” and the Grateful Dead’s “Uncle John’s Band.” They also preformed: “Guinevere,” “A Dream For You,” “In Your Name,” “Our House,” then there was a short break.

As they promised the second half rocked with Stephen Stills singing and playing legendary guitar on “Love the One You’re With,” “Rock & Roll Woman” and throughout the second half. Stills is overlooked as a leading guitarist. Graham also mentioned that Stills played great guitar and had throughout the entire tour. 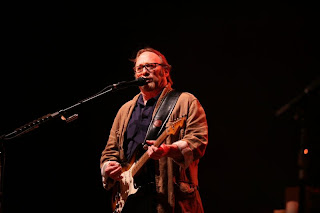 One of the many highlights of the evening was Crosby’s bluesy voice belting out “Almost Cut My Hair,” “Long Time Gone,” and “Wooden Ships” backed by Stills blistering guitar work.

Our seats were in the fourth row, DD center. It was an intimate setting with a barefooted Nash sipping red wine between songs, high fiving the people in front of us. I have seen a number of concerts over the years, but this easily ranks in the top five. And, adding to the wonderful evening, my friend R.O. let us park in his driveway, just a block or two away from the theater, so after the show it was a short walk down the hill into the car and zooming home listening to more CSN.

Note: Hendrix and I cut a bunch of stuff together. He was a very dear friend of mine, we were lonely in London together and hung out a lot. I left England suddenly, and years later I learned from Mitch Mitchell that Jimi had been looking for me everywhere – wanted me to join the Experience as the bass player, which would have been my greatest dream in life! It had something to do with a manager deciding it was a wrong career move and said, “we don’t know where he is.” I learned to play lead guitar from Jimi, he showed me the scales and said things like, “You begin by thinking about the chord position and base your improvisations on that Or he’d make some little remark like, F sharp is really cool, and we’d improvise until the inspiration began to ebb, then he’d look at me and say, “you drive.” You had to hear that cat play acoustic guitar! We once jammed for about five days, one long marathon session in my beach house in Malibu. The sheriff’s deputy overheard our guitar playing. When he found out it was us he asked permission to park his police car directly outside the house so he could listen in while he fielded radio calls. Told us not to worry about a thing, he’d be looking out for us. Stephen Stills, song notes on “Old Times Good Times” from the CSN box set.
Posted by The Misanthrope at 7:06 AM

I am sooooo jealous. CSN brings back not just memories, but entire chunks of my life.

On the Mark says: I can't believe they'd be that good without Neil, but you and I saw them (CSN&Y) at the Hollywood Bowl so you would know.

Alice, I knew of them and listened to them on the radio, but never really paid much attention to them until OTM and I saw them at the Hollywood Bowl a couple of years ago. Then, I loved them. They certainly bring back memories for millions.

OTM, With Neil Young they are a bit more hard charging. The Bowl concert had a strong anti-war message, which was good and fine, but Saturday it was about the music and that came through.