A Sunday of Sad Sinatra Songs

One and the same thing can at the same time be good, bad, and indifferent, e.g., music is good to the melancholy, bad to those who mourn, and neither good nor bad to the deaf.
Baruch Spinoza (1632 – 1677), philosopher

It’s Sunday morning for another 30 minutes and I have finished the Los Angeles Times and most of the New York Times. Prior to that listened to CBS "Sunday Morning" show, which featured Andy Williams and further confirmed why I never appreciated his milquetoast interpretations of popular standards. After that was the last 40 minutes of “Meet the Press,” with the politicians doing their version of he said, she said. It’s no wonder that this country has lost its way.

And, it’s no wonder that I am feeling melancholy. I drove just short of 300 miles yesterday taking my great aunt to see a retirement home that is comparable to a four-star hotel when matched up to her nursing facility with its hallways littered with patients asleep in their wheelchairs, and the new place is a $1,000 a month less. The day ended yesterday with auntie relying on a friend’s comment about “I read recently that when you move close to relatives they don’t visit you any more.” I have news for her, she will see me far less if she stays put because I am tired of that 120-mile round trip just to play Rummy 500. So, on top of everything else today I am fatigued. As I type this, I am listening to a Frank Sinatra mix that I call Frank Sinatra (sad). I also have Frank Sinatra (swinging) and Frank Sinatra (live).

My "sad" mix starts with “As Time Goes By” followed by classics from before I was born to his version in the ‘60s and finally in the mid-‘80s. On The Mark told me how he had complied a few of those versions and compared it to a listening version of comparing newly bottled to aged wine. I followed suit and made my list, which I listen to over and over. 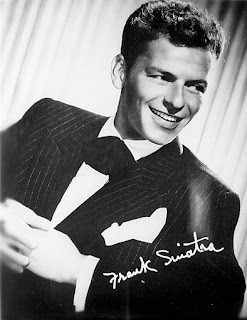 As Time Goes By from “Point of No Return”
Don't Worry 'bout Me “Where Are You”
Don't Worry 'bout Me “Frank Sinatra Vegas, Live At The Sands January-February 1966”
Angel Eyes “Only the Lonely”
Angel Eyes "80th year Frank at Meadows Land”
One for My Baby (And One More for the Road) “Only the Lonely”
One more for the Road (And One for My Baby) “Sinatra at the Sands”
One more for the Road “Frank at Meadows Land”
I Can't Believe I'm Losing You “Softly, As I Leave You”
Hey Look, No Cryin' “She Shot Me Down”
Yesterday “My Way”
Drinking Again “Nothing But The Best”
Empty Tables “The Reprise Collection”
Thanks for the Memory “She Shot Me Down”
The Gal That Got Away/It Never Entered My Mind “The Reprise Collection”
Send in the Clowns “The Reprise Collection”
Don't Take Your Love from Me “Sinatra and Strings”
If You Go Away “My Way”
Didn't We “My Way”
In the Wee Small Hours of the Morning “In the Wee Small Hours”
My Heart Stood Still “The Concert Sinatra”
My Heart Stood Still "Sinatra 80th" 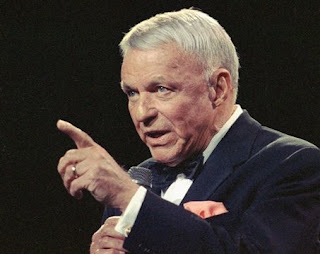 Glad to hear the new place is better than the old place (to paraphrase Pete Townsend, sort of).

As for Sinatra, the family and I ate in a new Italian restaurant this weekend, where our waitress was my youngest's school teacher (her family owns the place). It's all Sinatra-themed, with pictures and posters and music, etc. Those in the San Fernando Valley should check out Casa de Pizza for GREAT pizza and other Italian fine food -- looks like a hole in the wall, tastes like someone's mother used to make. Not mine, of course -- in fact family lore says that my paternal grandmother used to make Italian food when my dad was growing up -- spaghetti and meatballs. Recipe: put cooked spaghetti into bowl. Cut up a fried hamburger into pieces and put it in bowl. Pour ketchup over everything, mix, and serve. Prego!