There is a relationship between cartooning and people like Miró and Picasso which may not be understood by the cartoonist, but it definitely is related even in the early Disney.
Roy Lichtenstein (1923–97), pop artist 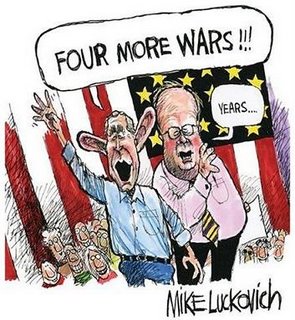 Here is a book I am looking forward to reading – the Pulitzer Prize winning cartoonist Mike Luckovich has a new book coming out "Four More Wars. "

Luckovich was interviewed in the recent Newsweek magazine. He was asked, You have satirized numerous presidents. How’s this presidency different?

His answer: previously, whether I was dealing either a Republican or a Democratic president, I always felt that they were kind of up to the job, basically. And this president, to me, doesn’t seem that way at all. It’s very scary to me that he occupies the office.”

I couldn’t agree with him more, unless he also included the vice president and the secretary of defense.
Posted by The Misanthrope at 12:26 AM