More Gas from the Oil Companies

Even if gas prices fall, consumers will continue to be gouged at the pump the only thing that we can be sure rises faster that the price of gasoline is the skyrocketing profits of oil companies.
Major R. Owens, D. Rep. New York

Just as people are getting angry and feed up with gas prices the energy policy of the white house gang, Chevron announces a major oil find in the Gulf of Mexico. Coincidence or strategic planning? 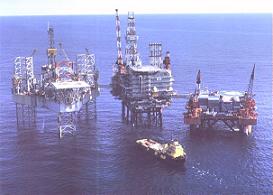 Last year every last weather hiccup was cause to raise gas station prices two to five cents a day, but now with prices hovering around $3.00 a gallon and a barrel of oil fluctuating between $70 to $100, the oil companies are reporting $8 to $10 billion in sales every three months the troubles are behind us. Yeah right. Gas is dropping in price because we are in election season, so it’s time to announce gas is no longer an issue -- for now.

When was the last time gas prices actually came down around a major holiday as they did this Labor Day? I can’t recall a single one.

I don’t believe in conspiracy theories because no one can keep a secret, but Chevron must have surely known about this oil field for sometime, but why would they want to say anything until they could get the gas prices up to a point that is close to what they “should be” based on inflation. There will be some bumpy roads ahead, because it will take three to four years to get this new oil field piped to shore, but it will be smooth sailing everytime it's in the oil companies interest to reduce prices or announce new wonderful fields.
Posted by The Misanthrope at 12:03 AM

Haven't seen you in awhile. Hope things are going well.

As far as this oil discovery goes, yeah, it is conveniently timed to be sure. Especially considering how closely Bush's poll numbers track gas prices (see the current edition of The BHC for a link to this).

Numbers I have seen about this field are that it has some 3-15 billion bbls, i.e. not much in the larger scheme, and could produce 750,000 bbls/day, about 1% of world oil consumption or 4% of US consumption. This also doesn't look like it would come online for 6 years. But 6 years from now, 750K bbls/day will considerably less than 1% of world use.

Such numbers would not have an effect of world prices if those were only dependent on a strict supply/demand curve. But, as we know, commodity prices are driven more by perception and the perception that a major discovery has been made, even though it won't supply a drop of oil for 6 years, will be a boon for the GOP in November.

Thebhc, all is well and I feel content enough to start writing again, at least until work gets crazy, which is frequently.