A talent for drama is not a talent for writing, but is an ability to articulate human relationships.*
Gore Vidal, novelist, essayist

Leaving the house on Sunday is a big deal for me; I rarely leave. Leaving the house on Sunday before I can even read the newspapers is near impossible, but when I received a group e-mail from Johnna Adams announcing that she was coming to town for a brief weekend stay to see a reading of her trilogy of plays, I had to leave the house. This is not my usual hyperbole; On The Mark has offered me tickets to the theater, the LA Philharmonic and other events and I politely declined. 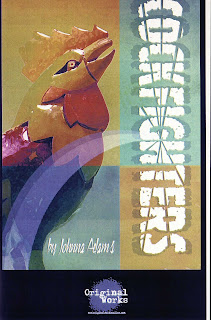 I arrived at the Bootleg Theater, 2220 Beverly Blvd, at 10 a.m. to watch a reading of “Cockfighters” by Johnna Adams. Johnna arrived shortly thereafter. It was great to see her. We were co-workers for a couple of years; I even took a 10-minute playwriting class with her. I spent two weeks writing my short play about a high-tech toilet I found at Jack’s Shack. Johnna wrote her play during lunch one day and she had a true laugh out loud scene that just took your breath away. The class paused during the reading to wait for the laughter to die down. I didn’t embarrass myself with my play, but Johnna was the star student by a wide margin. She could have taught the class. Her credentials were better than the instructor’s, but it was for the pleasure of writing and encouraging a co-worker.

After a hug, a picture and some catching up, I was put to work collating a couple of extra scripts that still had pages missing. The actors arrived and greeted Johnna. 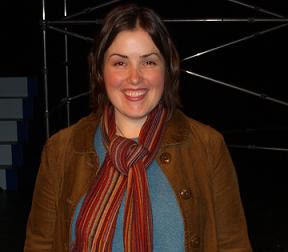 The seats were almost filled, the actors were seated in position, and the reading was started. This was simply a reading, which means the actors sit on the stage and read the script in front of them.

The narrator set the scene and the actors started reading. Within a few pages, the actors started acting; they could not help themselves as the characters were so well written they easily came to life, the play was engaging and suspenseful. I kept guessing who did what, but I was wrong. The ending was surprising and the entire play engaging.

After it was over and the applause stopped, I felt like some Midwest visitor in Hollywood who sees a celebrity. I didn’t know what to say accept how great the play was. Then her publisher arrived and Johnna gave me a bound copy of her play which I immediately had her autograph. I didn’t stay for the other two plays because I still had the Sunday papers to read and it was a gray drizzly day and I wanted to sit by the fire. There is only so much sacrifice one can make.

I guarantee you are going to hear about Johnna in one of the mainstream magazines very soon and she will be hailed as the next great New York playwright.

To keep current with Johnna check out her blog Blindsquirrel Blogging.

*Johnna has both a talent for drama and writing.
Posted by The Misanthrope at 12:04 AM

On The Mark says: It must have been well-written if you were surprised at the end. You usually always guess the ending correctly.

I kept guessing this person, no it must be that person, but I was wrong. It all made sense and was outstanding.

Awww! This is so sweet! And it was so good to get to see you. If a production goes through, I will be back a few times for rehearsals next year. Fingers crossed.

This was a delightful post..and you made me miss the Old Globe in San Diego.

Bakersfield just doesn't have much 'culture'..I am sure thats a shock :P

Hi Johnna, You know me better than to think me sweet. I am just being honest.

Hi Dusty, Thank you. I haven't been to Bakersfield in years. It's not really that bad is it?