From a commercial point of view, if Christmas did not exist it would be necessary to invent it.
Katharine Whitehorn, journalist

As I get into the Christmas spirit, I have assembled all our holiday songs onto the iPod. It’s rather convenient to start from the top with Ray Davies’ “Thanksgiving Day” or play straight through from Dean Martin, Frank Sinatra, Diana Krall, Vince Guaraldi, Jane Monheit, Kenny G, Wynton Marsalis, The Tonight Show Band with Doc Severson, Jethro Tull to the one off specialties from "A Very Special Christmas" that features, Bruce Springsteen, Eurythmics, Stevie Nicks, Madonna, Bryan Adams, Bob Seger or more one-offs from Mick Jagger and Joss Stone, The Kinks, and John Lennon. Thankfully the iPod allows shuffling to mix it all up.

It sounds good until I start to realize that while I have 150 songs and 8.7 hours of melodious holiday music that I also have to wade through roughly: 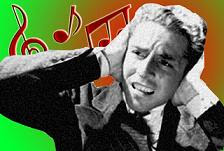 Okay, I’ll admit that I actually like some of it for a little while, but soon I long for regular music because all these holiday tunes make the season seem like something from “Leave it to Beaver” or “Ozzie And Harriet” when really it’s just music that encourages over spending and debt.

Christmas, Ba humbug!
Posted by The Misanthrope at 12:01 AM

Greensleeves and a few others I can do over and over. But the ubiquitous ones, that blast at me from every Target orifice do not belong on my ipod.

You could change that headline to "Music that Encourages Death."

Sorry, some of the holiday music wears on me. Doesn't matter what, it just gets overplayed.

Hi Sporks, my iPod doubles as the house stereo too. However, I have transferred all the holiday music to another iPod and I hope to get other music I am not crazy about off of mine, but I have plenty of room still.

Hi Jack, I think that music could play that roll.

If we ever run into each other on a plane remember not to say Hi and my name in the same sentence. ;)