In America few people will trust you unless you are irreverent.
Norman Mailer (1923-2007), author 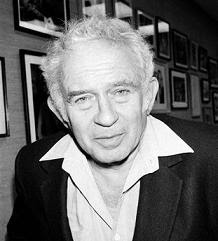 Here is the link to the New York Times story.

Norman Mailer, Pulitzer prize-winning author, is shown in in this Sept. 1984 photo. Mailer, the macho prince of American letters who for decades reigned as the country's literary conscience and provocateur, died of renal failure early Saturday. He was 84.

At different points in his life Mr. Mailer was a prodigious drinker and drug taker, a womanizer, a devoted family man, a would-be politician who ran for mayor of New York, a hipster existentialist, an antiwar protester, an opponent of women’s liberation and an all-purpose feuder and short-fused brawler, who with the slightest provocation would happily engage in head-butting, arm-wrestling and random punch-throwing. Boxing obsessed him and inspired some of his best writing. Any time he met a critic or a reviewer, even a friendly one, he would put up his fists and drop into a crouch.

On The Mark and I heard him speak at least a couple of times. One of my favorite events was his lecture on Picasso at the Design Center in Los Angeles in the mid-'90s. His book I enjoyed best was "The Executioner's Song." An incredible journey in the life of Gary Gilmore and his senseless killings.

Philip Roth has an poignant passage on Mailer in his new book "Exit Ghost."
Posted by The Misanthrope at 8:51 AM