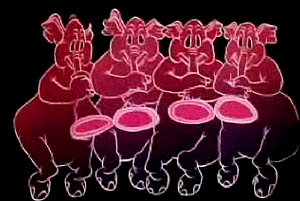 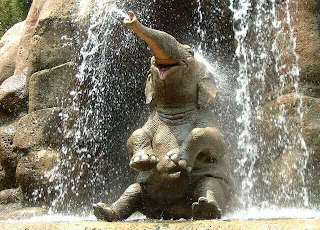 This is too absurd not to comment upon. Here is the whole story from AP.

We have the woman, who became famous for being an heir to the person who made his last name eponymous with lodging away from home. She has taken being famous for being famous to new levels of absurdity. Apparently, now she is trying to restore her reputation after spending a few hours in jail for drunken driving by rehabilitating elephants. They'll never forget this ordeal. 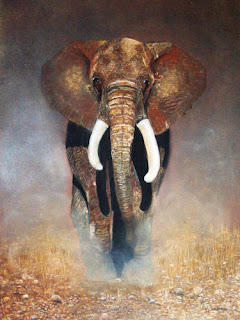 It seems that Paris Hilton on a trip to Gauhati, India, decided to intervene on behalf of drunken pachyderms and begin a 12-step program for them. I kid you not, well I kid about the 12-step program.

Activists said a celebrity endorsement such as Hilton's was sure to raise awareness of the plight of the pachyderms that get drunk on farmers' homemade rice beer and then go on an inebriated rampage.

"The elephants get drunk all the time. It is becoming quite dangerous. We need to stop making alcohol available to them," said Hilton. And, I might add, to irresponsible celebrities who drive under the influence, neglect to wear undergarments, allow private sex videos to pollute the internet, and have sex and do drugs in public restrooms.

I have to believe that bombed, crapulent, elephants are far less a threat than rich, spoiled celebrities under the same conditions who influence and serve as role models for their mentally bankrupt sycophants. Maybe she should use her famous name to do something truly constructive to help society. There are hundreds of struggling non-profit organizations who could use the attention her name brings to honestly help people. 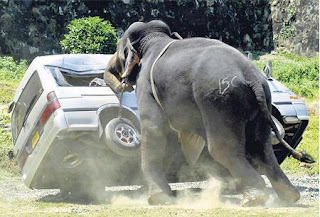 Where the hell is Elliot Mintz?
Posted by The Misanthrope at 12:01 AM

What? Don't like Paris Hilton or something? ;-)
I'm just glad she's doing SOMETHING other than hanging out pantyless with Britney Spears.
Us Aquarian girls aren't all that bad, are we?
There but for the Grace of God go I, I'm so glad I wasn't born a gazillionairess.

Hi Chandira, This was a post that I was popping out of my socks to write. I had so much fun writing this one. I should have bounced ideas around with someone because there is so much material here to make fun of. This is a missed opportunity for the late night shows.

On the Mark says: Turns out this story was fabricated. AP pulled the story when it found out the stringer they used lifted the quote from a gossip website and Paris was never involved.

OTM, thanks, but I am disappointed. This was a great story for Paris to be involved in because it is just so air-head like. In any case, I had fun writing it.