Come children, let us shut up the box and the puppets, for our play is played out.
William Makepeace Thackeray (1811–63), writer

From AP
Immortalized in the Washington's Smithsonian Institution as "America's Legendary Daredevil," Knievel was best known for a failed 1974 attempt to jump Snake River Canyon on a rocket-powered cycle and a spectacular crash at Caesar's Palace in Las Vegas. He suffered nearly 40 broken bones (a clip of the jump is posted below) before he retired in 1980. 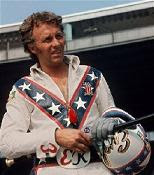 Though Knievel dropped off the pop culture radar in the '80s, the image of the high-flying motorcyclist clad in patriotic, star-studded colors was never erased from public consciousness. He always had fans and enjoyed a resurgence in popularity in recent years.

Another icon from my youth gone
We spent days riding our bicycles jumping over things. We actually stopped traffic with our bicycle jumps. We used a sawhorse and a heavy piece of plywood. We used a heavy piece of plywood as a ramp leaned against a 3-or 4-foot-high sawhorse positioned right at the front of my friend’s front yard grass. We started two houses back and pedaled our little hearts out and went flying through the air (without helmets). There were a number of cars watching us and not a single parent stopped us. I can’t even imagine what we were thinking. No one got hurt, my bike wasn’t as fortunate. The front forks were not made for such trauma, they eventually bent outward. Somehow my dad fixed it.

Eventually, we got real motorcycles. I was in the 7th grade. I had a brand new, green Suzuki 120cc motorcycle. I stripped it down as best I could into a dirt bike in order to become a motocross racer. Every now and again, we would find a field that had a natural hill that served as a ramp to make us airborne. We never jumped as high on the motorcycles as we did on the bicycles, but other little kids enjoyed watching us get our front tire up in the air.

Another signpost of my youth gone.


Posted by The Misanthrope at 6:35 AM

I feel the same way.