My lovely wife and I took our kids to Legoland this past week (hint: it's empty on Christmas) and had a great time. The best part? Probably the Fun Town store where you can individually select bricks from dozens of bins, organized by shape and color (and a few awesome bins of mixed Lego blocks that yielded quite a few great finds). In addition to the pound of Lego we hand-selected, I also purchased a Star Wars set and we bought the kids another bin of 200 pieces.

But that's not what I wanted to share with you all.

I snapped quite a few pix of stuff that I knew (hoped?) would find an audience out here in cyberspace -- the first is this mysterious Geppetto-like figure, one of the many Lego-built figures in the park. 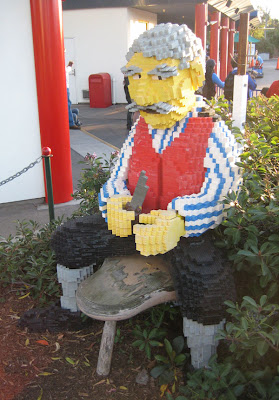 Geppetto is wielding some sort of knife, perhaps considering ending his sad existence now that Pinocchio has run away (or maybe he's just rehearsing for his role in "Sweeney Todd 2: The Demon Toymaker of Fleet Street").

Legoland also has rides -- not very interesting from a blog perspective. But Miniland, which recreates famous cities completely in Lego... I am *definitely* going to be sharing some of that in the coming days...
Posted by B2 at 12:22 AM

It’s a perfect place for reformed alcoholics because everything is blurry without the drinking. However, I am sure you all had a good time (actually I know you did, since you told me the other day).

On the Mark says: I bought a family annual membership a few months ago and plan on going back at least once more. My favorite part of the park was miniature land.