Rock & roll doesn’t necessarily mean a band. It doesn’t mean a singer, and it doesn’t mean a lyric, really. … It’s that question of trying to be immortal.
Malcolm McLaren, British rock impresario

This is rather impressive that a Led Zeppelin performance can make the front page of the New York Times, at least the online version.

I have no real interest in seeing them in person, but I’d like to watch an HBO or Showtime special. You can read the review in the link above. 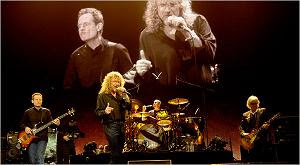 Come on . . . you don't actually believe the New York Times is in the business of producing real journalism.

It's mostly tabloid journalism, just like everything on cable and any other mainstream media.

Hi Anonymous, I truly believe the NYTimes is one of the great newspapers of our time. Yes, they have faults plenty of them. Jumping on the band wagon to war was one their biggest mistakes, but they did their best to correct it. As I said, the front-page story was online. Nonetheless, it is a story that one of the world's more popular rock and roll bands played for the first time in a number of years.

I stood 30 ft away from Robert Plant for an hour and a half, and I want a repeat of that experience, beard or not. He's still the hottest Rock God there is, with the possible exception of Marilyn Manson or Henry Rollins.