I always begin at the left with the opening word of the sentence and read toward the right and I recommend this method.
James Thurber (1894–1961), humorist

You will see that my compatriots are avid readers. B2 is a truly a voracious reader. I have mentioned that he and I work together, so I will share this tidbit with you; always around his desk are a stack of books, for him and his family. If I walk into the kitchen at lunch there is a good chance B2 is there reading. If I happen to be outside, the odds are good B2 will be walking to the Library while reading a book.

On The Mark reads in the quiet of the evening. I read more often than not five pages before going to sleep, which I hate. I really get into the book if I can read 50 plus pages in one sitting.
Without further ado just a few of the favorite books the writers at Toner Mishap have read this year.

The Creators, by Paul Johnson
Blackwater, by Jeremy Scahill
Covering Islam, by Edward Said (published 1981)
Dispatches from the Edge, by Anderson Cooper

Note: I plan on tackling the new translation of War & Peace next summer, so “quantity” will be sacrificed for “quality” next year.

B2's List
Asked how many books he read in a year B2 responded: I’d have to guess about 100, figuring that there are weeks when I read just one and weeks when I read three or four. And possibly more, depending on how you count graphic novels (which can take the same time to get through as a short novel). Of course, I also read at night with each of my kids, so you’d have to add in long stuff like Harry Potter, Inkheart, and The Wonderful Wizard of Oz, as well as the shorter stuff like The Puppy in the Playground and the Junie B. Jones series and princess stories...

Here are 10 memorable ones from the year... but I go through too many to be able to remember back all the way to January with any real recall – I tried my best. In no particular order:

Fiction
Ant Farm by Simon Rich
Soon I Will Be Invincible by Austin Grossman
The Latke Who Couldn't Stop Screaming by Lemony Snicket
Geek Mafia by Rick Dakan (self-published fiction)
Overclocked by Cory Doctorow
The Yiddish Policeman’s Union by Michael Chabon
I had to eliminate a bunch more... so this is a whittled-down list, for sure. I must stop thinking about it, or I’ll have even more on the list.

The Misanthrope's List
Non-fiction
Exile in Hell: A Season with the Rolling Stones 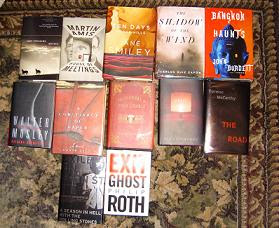 Posted by The Misanthrope at 7:27 AM

Your list makes me wish I had kept a list of all the books I read last year.

I have to agree on the Lemony Snicket book, perhaps the best Hanukkah book ever.

I think that the new Jenny Crusie Bob Mayer book was this year - Agnes and the Hitman -I love everything Jenny write. The Unfortunate Misfortunes was also this year - another book she contributed to that I loved

And, I have to admit that I read a ton or romance novels, at least 100 a year - but I love a love story and a happy ending.

On the Mark says: Oh man, I forgot about "The Road." I would put that on my list in place of the James Lee Burke book. I knew I would be forgetting some of the books I've read.

I read Shadow of the Wind in 06, but just want to do a shout-out. It's a book I still think about. My two favorites of the year were/are The Udsed world by Haven Kimmel and The God of Animals by Aryn Kyle.

Thanks for the lists.

"When Pigasso Met Mootisse" is an awsome kid's book that is based no the relationship between Picasso and Matisse -- a great read; my kids loved it -- they're 8, 6, and 4 years old.

[awesome] -- typo, of course, as opposed to spelling error. How pathetic am I that I need to re-comment to clarify?