Typewriter Repairman and an Orangutan

“There is nothing to writing. All you do is sit down at a typewriter and bleed.”
Ernest Hemingway quotes (1899-1961), writer

There was a man, Martin Tytell, who loved typewriters, so much so that when he passed away back in September 2008, The Economist magazine carried his obituary. I too love typewriters, but it was all I could do to change the ribbon. I realize that last sentence may be over the heads of a number of readers who cannot imagine a world without computers or cell phones, but I am not going to explain it now. 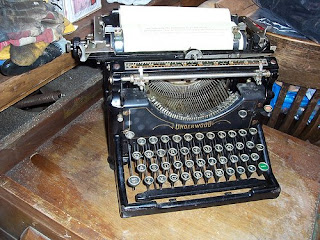 From The Economist:
…they would sit on the desk with an air of expectancy, like a concert grand once the lid is raised. On older models that keys, metal-rimmed with white inlay, invited the user to play forceful concertos on them, while the silvery type-bars rose and fell chittering and whispering from their beds.

From the blog/website The New Nixon:
Mr. Tytell wore a white lab coat and a bow tie while waiting on customers who included writers and journalists such as Dorothy Parker, Richard Condon, David Brinkley, and Harrison Salisbury. Both Adlai Stevenson and Dwight Eisenhower were among his clients. He was sufficiently established to have letters addressed to “Mr. Typewriter, New York,” delivered to his premises at 116 Fulton Street in lower Manhattan. 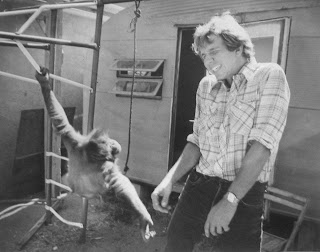 I typed many a concerto. However, I suspect it sounded more like a new violinist practicing and probably read just as badly. One of my longest compositions was the story on the orangutan learning to read. Here is a photo taken while I was on assignment interviewing a woman who was attempting to teach the orangutan how to read English. After this picture was taken (circa 1979-'80), I immediately dashed and locked myself in my car until that ape-like creature was locked up. I was younger in that picture than daughter is today.
Posted by The Misanthrope at 12:01 AM

This video is probably incomprehensible to many youngsters today -- "who is that guy?" "what's that sound?" "what is the guy doing with his hands?" -- but it was one of my favorite things when I was a lad:

It's ok, I'm not that old, (am I?) and I learned to type on a manual typewriter! I can still remember the magic of seeing the words appear, and hearing the click-click of the keys hitting paper!

Any form of written language, typed or otherwise, is High Magic.. But you can't really beat the sound of metal hammering on paper.
It's not quite as much fun to listen to the plastic clicking of a worn out plastic coffee covered keyboard.

I used to sit at a bench in college and write papers on manual typewriter that I would then walk into class with. I still contend that the writing was better before computers and Word came on to the scene. You had to think harder and take what you first wrote more seriously. I still have my manual and tap on it every once in a while. I find the sound relaxing.