“Every gun that's made, every warship launched, every rocket fired, signifies a theft from those who hunger and are not fed, those who are cold and not clothed. This world in arms...is spending the genius of its scientists, the sweat of its laborers.”
Dwight David Eisenhower (1890-1969), 34th President

The Misanthrope pulled this article from EnViSiOn, A Canadian Perspective Visually and Verbally Expressed with Passion

I have to thank Jonathan Turley for this article, and for proving to me that Arkansas is a creepy place. 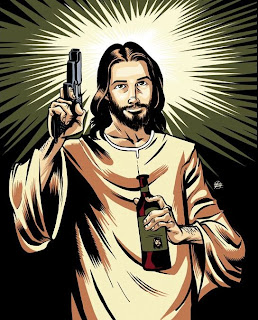 Guns and God: Arkansas Legislators Move to Armed the Faithful in Church

Legislators in Arkansas do no want to have to chose between god and guns. They are pushing legislation to allow citizens to pack heat in the house of God. Grant Exton is a gun owner and president of the state’s Concealed Carry Association insists that they are simply trying to give all churches the right have armed congregationalists. Gun owners can then lock and load for Jesus.

This does not go over well with Little Rock pastor John Phillips for good reason. In 1986, he explained: “A gentleman came into the church. He was mentally deranged, and at the end of the sermon, pulled out a gun and shouted something about baptism and proceeded to shoot me in the back a couple of times. I still carry one of the bullets embedded in my spine.”

This could pose a difficult choice for gun owners of what weapon is best suited for a particular sermon. A Glock might be suitable for a New Testament sermon, but the Old Testament is strictly non-automatic weapons only. Easter might call for something cute like a derringer while Christmas deserves a MAC-10.
Posted by The Misanthrope at 4:30 PM

Email ThisBlogThis!Share to TwitterShare to FacebookShare to Pinterest
Labels: guns and god

You could always apply for a job at Wal-Mart in corporate headquarters. ;)

Jack, I am fairly certain I would quickly become a target.

Guns should have banned years ago. This is ridiculous.

Libhom, I agree, but sadly people have been brainwashed and there is far too much money in manufacturing guns. It's our number one export, but that stat is not generally reported. You can safely say, the United States has made the world a far more dangerous place.

I suspect though that away from the money to be made in weapons it the strength of the Gun lobby in your country has more to do with individualism. The right to totally control your own destiny right down to your own self defence. As a Canadian this baffles me, as I suspect until we as humans realise we are all in this together we will never be free of the desire for guns.

So in Arkansas, they really do praise the lord and pass the ammunition.