Another installment in my Legoland pix -- two shots from the "Fairy Tale" ride, in which scenes from various non-Disney-owned fairy tale properties (or those that can somehow be still considered public domain) are built entirely from Lego and non-Lego parts (which comprises everything in the universe, really).

As for rights management, it's interesting to note as an aside that the Lego store featured a build-some-reindeer-and-a-sled activity, with said reindeer totalling nine and the lead reindeer featuring a spot upon which you could easily put a red brick to signify a certain reindeer's bright nose... but patrons were forbidden to do so because the rights to Rudolph are still held tightly and so Legoland can't simulate that reindeer. 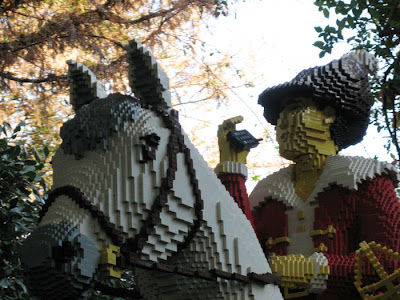 Here we see Prince Charming chatting with someone on his celphone -- presumably *not* Sleeping Beauty, as she's... well... asleep, right? Weirder still is that you can hear a high-pitched tinny voice coming through the speaker (sort of like one of the Chipmunks) sounding as though it is giving a long list of things to do... interspersed with his lower-pitched grunt of assent. My guess is he's reconsidering whether he should wake his beloved or not. 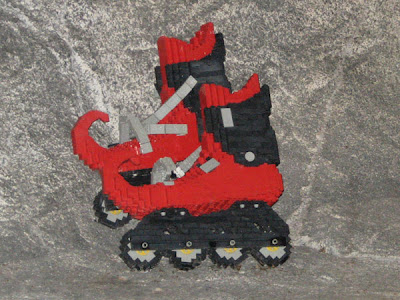 I'm not entirely sure why Aladdin abandons his shoes in the cave of wonders as he rubs the magic lamp, but here they are -- for some reason with rollerblade attachments.
Posted by B2 at 3:45 PM