Monkey to Man or Man to Monkey

For the ordinary man is passive. Within a narrow circle (home life, and perhaps the trade unions or local politics) he feels himself master of his fate, but against major events he is as helpless as against the elements. So far from endeavoring to influence the future, he simply lies down and lets things happen to him.
George Orwell (1903–50), author

It seems we are becoming more like chimps based on a new study published in the journal Science involving chimps and a separate study testing human identical twins, according to an article in the Los Angeles Times. 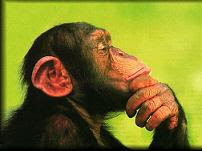 The study was to determine if a sense of fair play belongs only to humans and apparently it does because the gregarious anthropoid ape (Pan troglodytes) readily accepted stingy offers humans would tend to reject. An example is that one person is told to divide a small amount of money between them, if the second player accepts the offer, the money is shared. However, if the second person rejects the offers because it is not generous enough, then neither player gets anything. The chimpanzees were offered trays with raisins and the second chimp always accepted whatever was provided.

Based on this study, it seems that we humans are devolving as we readily accept what government tells us, accept that CEOs continue to make 100s times more than the lowest paid employee, accept reductions in benefits, and simply accept the status quo without argument.
Posted by The Misanthrope at 9:40 AM

The signs are indeed scary. This helps also to explain why our neighbors, who had a couch dumped on their property about a week and a half ago, appear to have carried that same couch across the street to dump it on our property. Clearly, proto-chimps don't know the number to call to report illegal dumping and have it removed by city waste services. They are smart enough, however, to recognize that we've dealt with half a dozen or so such incidents in the past and have a handle on how to resolve them without foisting the problem on our neighbors.

Teresa, you are much more civil and mature than I. I would have dragged it back and made sure it blocked their driveway.