It is almost as if you were frantically constructing another world while the world that you live in dissolves beneath your feet, and that your survival depends on completing this construction at least one second before the old habitation collapses.
Tennessee Williams (1914–83), playwright

From The Times-Picayune on the anniversary of Katrina: 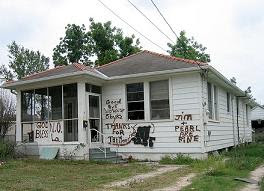 ...Louisiana had three times more damaged homes and seven times more severely damaged homes than Mississippi. Universities in this state had three times as many students displaced and had four times the losses of Mississippi's campuses. Louisiana fisheries suffered almost 75 percent of the damage done by Katrina, and our hospitals lost 97 percent of the hospital beds closed by the storm.

Yet in every case, Mississippi ended up with a disproportionate share of aid. Housing grants, for instance: Mississippi got $5.5 billion in Community Development Block Grant money for its 61,000 damaged homes. Louisiana, with 204,000 damaged homes, got $10.4 billion. If the aid were given out proportionately, this state would have gotten twice that much.

We hope that President Bush and Congress remember that imbalance when they consider Louisiana's request for $4 billion to keep the Road Home Program in the black.

Our neighbors on the Gulf Coast were hit hard by Katrina, no doubt about it. And Mississippians needed the help of the federal government to rebuild and recover. No one who has suffered from devastation would argue otherwise.

All Louisiana wants is to be treated fairly. But that hasn't happened.

Some people point to the clout of Mississippi's congressional delegation as the reason. Others say that Louisiana's reputation for political chicanery has hurt us.

Frankly, neither should be an issue. The people of Louisiana are no less deserving of disaster aid because their representatives are newer to Congress or because some of the people we trusted to lead us turned out to be scoundrels.

As President Bush returns today to mark the second anniversary of Katrina, this is what Louisianians need him to remember:

We are Americans who have suffered a great tragedy. We have worked tirelessly for two years to revive this beloved place and reconstruct our lives. And we ought to get no less help from our government than any other victims of this disaster....
Posted by The Misanthrope at 12:01 AM