Saving lives is not a top priority in the halls of power. Being compassionate and concerned about human life can cause a man to lose his job. It can cause a woman not to get the job to begin with.
Myriam Miedzian, author

I have been sitting on this article since Saturday. This is absolutely unbelievable. Gov. Arnold Schwarzenegger tries to govern from the middle, but the Republicans only believe in their way or no way. As a result, they held up the state budget for two months until they made conditions worse for the homeless and the elderly. 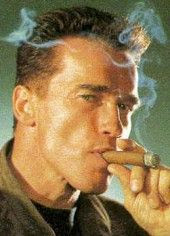 In California, Arnold eliminated a $55 million program that has helped thousands of mentally ill homeless people break the costly cycle of hospitalization, jails and street life, according to the Los Angeles Times.

Posted by The Misanthrope at 12:09 AM

On the Mark says: Excellent post. It truly is disgusting. And anybody who has been to a state park recently (such as myself) knows many of them are already in bad shape even before this cutback. They're a haven for gangs.