He had had much experience of physicians, and said, “the only way to keep your health is to eat what you don’t want, drink what you don’t like, and do what you’d druther not.”
Mark Twain (1835–1910), author

Here is the good news: Americans are living longer than ever. A baby born in the United States in 2004 can be expected to live an average of almost 78 years of age. This is my caveat: if they don’t have to drive Los Angeles freeways, deal with the TSA or expect any kind of customer service.

Here is the bad news: 41 other countries surpass the U.S. in longevity. Countries whose residents out live those of us in America include Japan, most of Europe, as well as Jordan, Guam and the Cayman Islands. 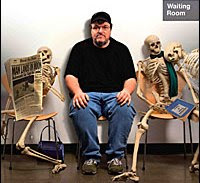 Andorra, a tiny country landlocked in Western Europe, located in the eastern Pyrenees mountains and bordered by Spain and France. Once isolated, it is currently a prosperous country mainly because of tourism and its status as a tax haven. Of course being wealthy helps to live a healthy worry free life, just look at Brooke Astor who lived to 105.

Among the reasons for the U.S’s surprisingly low ranking is that 47 million people lack health coverage, we have some of the fattest people, we have a high percentage of babies born who die before their first birthday, which puts America behind Cuba, Taiwan and most of Europe.

Posted by The Misanthrope at 4:10 AM

How of many of the illegal immigrants have health insurance? I am not saying this for the purpose of bashing them, but I wonder how they impact the numbers.

On the Mark says: That's actually a good question, Jack. Is it 47 million Americans, or 47 million people who live in America? Either way the stats are embarrassing.

Jack, the thought crossed my mind, but as On The Mark says, it's embarrassing either way.