Is President Bush snorting drugs and drinking again? It sure sounds like it in his defense of Attorney General Alberto R. Gonzales. 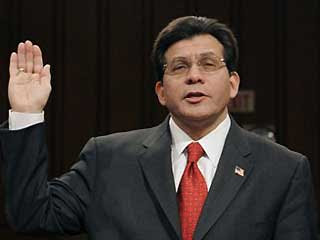 He praised Gonzales as “a man of integrity, decency and principle” and complained of the “months of unfair treatment” that preceded the resignation.

“It’s sad,” Mr. Bush said, asserting that Mr. Gonzales’s name had been “dragged through the mud for political reasons.”

Sad? It’s sad that he told an astonished Arlen Specter during a Senate Judiciary Committee hearing in January that habeas corpus rights are not guaranteed under the Constitution.

It is more like criminal as when it was revealed that while he was White House counsel, he tried to press a hospitalized Attorney General John Ashcroft to approve illegal domestic spying.

From Frank Rich at the New York Times:

By my rough, conservative calculation -- feel free to add -- there have been corruption, incompetence, and contracting or cronyism scandals in these cabinet departments: Defense, Education, Justice, Interior, Homeland Security, Veterans Affairs, Health and Human Services, and Housing and Urban Development. I am not counting State, whose deputy secretary, a champion of abstinence-based international AIDS funding, resigned last month in a prostitution scandal, or the General Services Administration, now being investigated for possibly steering federal favors to Republican Congressional candidates in 2006. Or the Office of Management and Budget, whose chief procurement officer was sentenced to prison in the Abramoff fallout. I will, however, toss in a figure that reveals the sheer depth of the overall malfeasance: no fewer than four inspectors general, the official watchdogs charged with investigating improprieties in each department, are themselves under investigation simultaneously -- an all-time record.

Wrongdoing of this magnitude does not happen by accident, but it is not necessarily instigated by a Watergate-style criminal conspiracy. When corruption is this pervasive, it can also be a byproduct of a governing philosophy. That's the case here. That Bush-Rove style of governance, the common denominator of all the administration scandals, is the Frankenstein creature that stalks the G.O.P. as it faces 2008. It has become the Republican brand and will remain so, even after this president goes, until courageous Republicans disown it and eradicate it.

Bring back sex in the Oval Office, please
Posted by The Misanthrope at 3:52 PM

It is about time old Al got the hell out of dodge. The man stayed way past his welcome.