You just can’t make this stuff up. A senator who votes against gay rights bills is then caught in the men's room by an undercover cop. The police would be better served fighting the gang problems, but the hypocrisy is what makes this matter news.

From the Washington Post:
Republican Senator from Idaho Larry E. Craig pleaded guilty earlier this month to misdemeanor disorderly-conduct charges stemming from his June arrest by an undercover police officer in a men's restroom at Minneapolis-St. Paul International Airport, a court spokeswoman and the senator's office said yesterday. 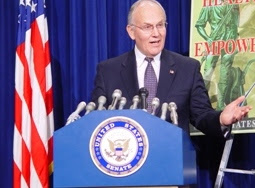 Craig issued a statement confirming his arrest and guilty plea, which were reported in the Capitol Hill newspaper Roll Call. But the Idaho Republican maintained that he had not engaged in any "inappropriate conduct" and that the airport police misunderstood his behavior.

"At the time of this incident, I complained to the police that they were misconstruing my actions. I was not involved in any inappropriate conduct," Craig said. "I should have had the advice of counsel in resolving this matter. In hindsight, I should not have pled guilty. I was trying to handle this matter myself quickly and expeditiously."

Now in his third term, Craig, 62, has been a member of the Senate Republican leadership. He has been a prominent figure on gun rights and Western land issues.

Roll Call, citing a copy of a report by airport police, said officers had been conducting a sting operation inside the men's room because of complaints of sexual activity there. The police report gives this account of the arrest:

The undercover officer was monitoring the restroom on June 11. A few minutes after noon, Craig entered and sat in the stall next to him. Craig began tapping his right foot, touched his right foot to the left foot of the officer and brushed his hand beneath the partition between them. He was then arrested. (this is the stuff we read and joked about while in junior high school; it was in the book “Everything You Always Wanted to Know about Sex, but were Afraid to Ask.”)

While he was being interviewed about the incident, Craig gave police a business card showing that he is a U.S. senator. "What do you think about that?" Craig asked the officer, according to the report obtained by Roll Call.


What the officer should have said is that your hypocrisy and politics are disgusting.

Let’s not forget:
Mark Foley of Florida, who quit the House last year after exchanging sexually explicit e-mail messages with under-age male pages. Worse still, Republican leaders had known for a while of Foley’s predatory sexuality involving teenagers who work for the Congress. then there are Republicans like Senator David Vitter of Louisiana, whose phone number turned up on the list of the so-called D.C. Madam, or Senator Ted Stevens of Alaska and Representative Rick Renzi of Arizona, both caught up in F.B.I. corruption investigations.

Posted by The Misanthrope at 7:50 AM

On the Mark says: He pled guilty hoping the whole thing would disappear. Now that a pesky reporter has brought it to the limelight he's backtracking. Why would anyone plead guilty to something like this if they weren't at fault? Also in your long list, don't forget about the other republican congressman or senator who's name was recently found in a madam's black book. The family and religion party...