Who Would have Guessed?
Keith Really did Inhale

They shoulda called me Little Cocaine, I was sniffing so much of the stuff! My nose got big enough to back a diesel truck in, unload it, and drive it right out again.
Little Richard, rock’n’roll musician

I have to take a moment to gloat, no not about all my correct posts about Bush and Cheney, but the fact that I know my Rolling Stones. Keith Richards and Dad; Keith Richards admitted that he did indeed inhale his dad’s ashes, just not with cocaine. 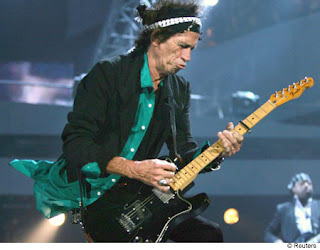 He admitted it because he is generating publicity for his memoirs. According to someplace on the internet where I found it, he said:

“I pulled the lid off (my father’s urn) and out comes a bit of dad on the dining room table. I’m going, ‘I can’t use the brush and dustpan for this’.

“What I found out is that ingesting your ancestors is a very respectable way of … y’know, he went down a treat.”

The autobiographical book is due in the fall of 2010, I suspect that will be about the time the Stones retire as a touring band.
Posted by The Misanthrope at 12:01 AM

On the Mark says: When I first saw the question I thought the next line was going to say he was involved in the conspiracy to kill Kennedy. I remember reading an in-depth article that stated many cultures ingest (in various ways) their ancestors. A couple days ago I was going to write that I would miss your daily posts, but I guess that wasn't necessary! Sorry about the ticket; knowing you as well as I do, I know that your blood pressure was probably hitting 200. It's ridiculous.

Thanks, but the jury is still out. I haven't gotten killed at work yet with work load, but it's coming. Also, blogs seem to be dropping readers in general.

However, writing just for a few friends is not a bad thing either. You can post anytime you know.