Balls of Fury
In Other Words, I Love Ping Pong

It is the child in man that is the source of his uniqueness and creativeness, and the playground is the optimal milieu for the unfolding of his capacities and talents.
Eric Hoffer (1902–83), philosopher

Ping Pong was a summer game in a friend’s garage when I was in high school. Then ping pong was escape from the shear hell of divorce and having to return home to my parents in my mid-thirties because I had no money, no job and lots of debt that was left to me to handle.

During those dark days, one of my oldest friends was between jobs too so we played ping pong for two or three months everyday several times a day. I’d be home and he would call and say let’s play or visa versa and we played.

Now that I am back on my feet and have purchased my second home since those days, we are again playing ping pong, but mostly on Friday or Saturday nights. However, there has been a change. I have gotten even better; as a matter of fact I am almost unbeatable. 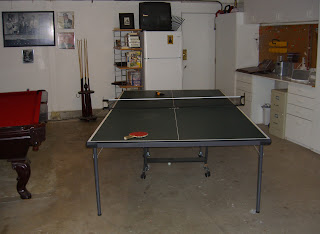 I recently played a young, strapping kid (he’s twenty something) at a Hollywood/Beverly Hills bar and beat him 10 straight games. My friend brought over someone who was suppose to be very good and I beat him handily. A former police woman who is in great shape came over and I have heard others talk about how good she is – I beat her easily three or four times before she left threatening to return to win. I have yet to hear from her.

I am not egoistical enough to believe there is no one out there who can beat me, but I have to believe for an old amateur I must be pretty good. I have included a picture of my garage where unwitting challengers go home discouraged.

It’s lonely at the top.

*the photo is of my garage where I play great ping pong and terrible pool. Yes, there is a lack of tools as a hammer or screwdriver in my hands is the beginning of even more expensive repairs.
Posted by The Misanthrope at 12:19 AM

in houston, let me know, bchee@yahoo.com

know some good places to play.

Unknown said...
This comment has been removed by a blog administrator.
10:25 PM