Looking for and successfully achieving much publicity, Nebraska Democratic State Senator Ernie Chambers has filed a lawsuit against the universal autarchy in a silly example to highlight frivolous lawsuits. 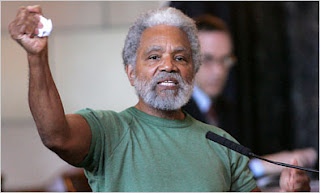 One of the reasons this has and will receive much more attention than it deserves is because reporters love nothing more than being able to write off-the-wall stories. This certainly qualifies

However, most of the reports are stating that he filed the suit in an effort to stop natural disasters from befalling the world.

Chambers filed a lawsuit against God in Douglas County Court Friday afternoon, accusing God of causing "fearsome floods, egregious earthquakes, horrendous hurricanes, terrifying tornadoes, pestilential plagues, ferocious famines, devastating droughts, genocidal wars, birth defects, and the like," personally I would have blamed it on the Bush gang. He also finds god responsible for having his chroniclers "disseminate in written form, said admissions, throughout the Earth in order to inspire fear, dread, anxiety, terror and uncertainty, in order to coerce obedience to Defendant's will."

Chambers said the lawsuit was triggered by a federal suit filed against a judge who recently barred words such as "rape" and "victim" from a sexual assault trial.

Chambers said Bowen's lawsuit is inappropriate because the Nebraska Supreme Court has already considered the case and federal courts follow the decisions of state supreme courts on state matters.

"This lawsuit having been filed and being of such questionable merit creates a circumstance where my lawsuit is appropriately filed," Chambers said. "People might call it frivolous but if they read it they'll see there are very serious issues I have raised."

Tip of the hat to my compadre, B2
Posted by The Misanthrope at 9:21 AM