The United States has got some of the dumbest people in the world. I want you to know that we know that.
Ted Turner, businessman

President Bush is once again out embarrassing the country:

According to a story from the Associated press: 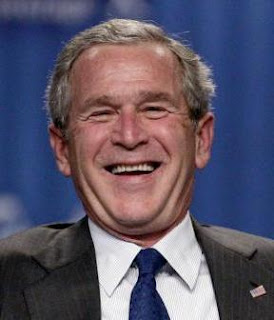 At the Asia-Pacific Economic Cooperation forum, he said: "Thank you for being such a fine host for the OPEC summit," Bush said to Australian Prime Minister John Howard. Bush quickly corrected himself. "APEC summit," he said, joking that Howard had invited him to the OPEC summit next year (for the record, an impossibility, since neither Australia nor the U.S. are OPEC members).

The president's next goof went uncorrected — by him anyway. Talking about Howard's visit to Iraq last year to thank his country's soldiers serving there, Bush called them "Austrian troops."

That one was fixed for him. Though tapes of the speech clearly show Bush saying "Austrian," the official text released by the White House switched it to "Australian."

Then, speech done, Bush confidently headed out — the wrong way.

He strode away from the lectern on a path that would have sent him over a steep drop. Howard and others redirected the president to center stage, where there were steps leading down to the floor of the theater.

The event had inauspicious beginnings. Bush started 10 minutes late, so that APEC workers could hustle people out of the theater's balcony seating to fill the many empty portions of the main orchestra section below — which is most visible on camera.

Even resettled, the audience remained quiet throughout the president's remarks, applauding only when he was finished.

A logistical glitch added to the woes.

APEC security workers would not allow the members of the media who travel in Bush's motorcade to enter the Opera House along with him. This even though the journalists allowed into the president's entourage are extensively screened and guarded by the Secret Service, which has more stringent security standards than about any operation in the world. And even though they always accompany him into public events.


It would be so nice if the the betterment of the country he would leave early and take Dick Cheney with him.

Posted by The Misanthrope at 7:54 AM