If there is a look of human eyes that tells of perpetual loneliness, so there is also the familiar look that is the sign of perpetual crowds.
Alice Meynell (1847–1922), poet, essayist

Yesterday (actually Tuesday) I took the train for the first time in 15 years from my home to downtown Los Angeles. There was no particular reason, but I have been thinking about it for some time. Maybe the reason was that all my magazines were piling up and I was tossing many without even reading them. 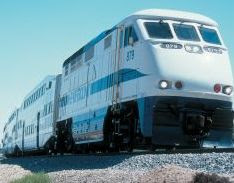 This morning, I finished the LATimes and the Wall Street Journal and started on September’s issue of The Atlantic, with the cover headline blaring “Lessons of a Failed Presidency, which I proudly did not fold over since I live in a right-wing nut-job of a city. Most recently, my city that houses the Ronald Reagan Library, presented a local church with a $40,000 bill for anticipated police services because the church sheltered a woman whom authorities want to deport across the border, even though her husband and child are U.S. citizens. Never mind that it’s the job of police to protect and serve and not bill directly for such services. Now you know why I was flaunting the cover around.

However, the passengers were too busy chatting about the new television shows such as “Dancing with the Stars,” “CSI,” and reading the bible (that was the person next to me, when she wasn’t chatting on her cell phone). “Oh,” one woman blared, Marcel Marceau died. She was reading yesterday’s paper.

I love my car.

There are two seats of two facing each other and no leg room. I twisted and shifted a bit to avoid having my leg cramp up, but there truly is very little leg room. Seriously, who designed this Billy Barty (he was a vertically challenged person, or what used to be called a midget, for those younger readers checking in on Hopper or Bjork).

I used to take the Metrolink when it first started up from my right-wing city to downtown by in 1992-3, but found the car more efficient for getting home quicker. Also, the line of humanity crowding in a herdable line from the train to the subway depressed me; it reminded me of the beginning of “Joe Versus the Volcano.” (see Monday's post for a clip)

I love my car. I just hate oil companies and traffic.
Posted by The Misanthrope at 12:05 AM

Yes, let us speak of L.A. commuting options. My office recently moved from Hollywood Blvd. to mid-Wilshire, tacking 20-30 minutes on to my commute each way, and crawling through the canyon in my car/coffin every morning and night was making me batty. I was arriving at work tense and arriving home either in a pall of depression or a rage state.

Meanwhile, public transportation falls short of fandamntastic in our fair city. There have been periods where I've tried to make it work—others in which I've been forced to make it work—and my commutes are even longer and not necessarily less stressful. Manners are in short supply among the mass transit set.

Lately my compromise has been to bicycle to the N. Hollywood Metro station, take the train two short stops—just to get me and my trusty steed through the damn canyon—then cycle from the Hollywood/Highland station to mid-Wilshire. It makes my commute longer still, but I actually arrive at work with far less stress and my evening begins directly at quitting time, because cycling is recreation, while driving or riding the bus is very much not.

It is getting colder and wetter though; I haven't given up my parking place just yet.

As for the Reagan Library, I went there once for a presidential shoe exhibit (!) because, well, how nutty is that?! I brought a notebook along to jot notes in case I wanted to write something about it later; I may as well have been carrying a ticking package wrapped in duct tape (do bombs tick anymore?) for all the attention I got. At every turn some docent was asking me why I had come and what could they help me with—and not in a friendly way. I must not look their type, which is a relief.

The shoe exhibit was lame. Ha! Get it?

Teresa, Mid-Wilshire has to be one of the worse locations. The only place worse is Century City. Southern California is truly gridlocked.

I like having the library near, but I don't buy into Regan's near sainthood that the right is so eager to anoint him with.