Me thinks that the moment my legs begin to move, my thoughts begin to flow.
Henry David Thoreau (1817-1862), writer, philosopher

The past two weekends I have gone on relatively short hikes with my buddy, who knows that I would starve if it wasn’t for his great pizza, garlic bread, meatballs, spaghetti and minestrone soup.

Here are a couple of pictures from the Santa Susanna Mountains. 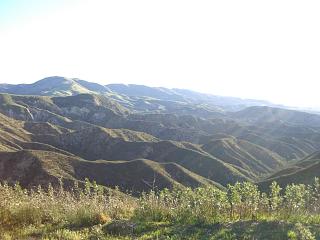 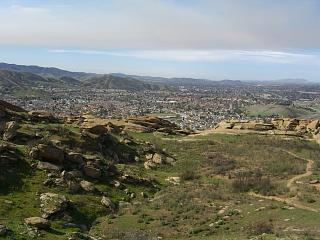 Looking west toward Simi Valley somewhere between 7 a.m. and 8 a.m. Monday, Feb.6
Posted by The Misanthrope at 12:35 AM 7 comments:

Worse Than A Cell Phone

There doesn’t seem like there is anything worse than the knucklehead in front of you yakking on the phone slowing traffic down. However, and I am a bit ashamed to admit it, but what I was doing was far worse. 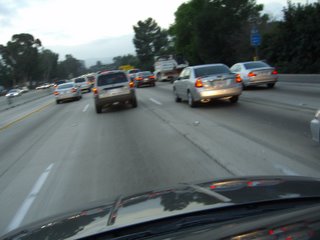 I was stuck on the 405 freeway (aka San Diego freeway) going over the Sepulveda pass when I spied a license plate that read HA8 D 405.

I had to have a picture of it for the blog, but alas, all I did was hold up traffic and I didn’t get the shot. While it’s not in the league with the shooting of a friend, allow me to apologize for my self indulgence. The license plate belonged to the SUV in front of me, but I couldn't risk getting too close and having to stop suddenly. As it is, my insurance is going to go up $300 a year because I moved 10 miles east!
Posted by The Misanthrope at 12:12 AM 4 comments:

A What If Role Reversal

A gun is the ideal weapon of the detached, the reticent, the almost autistic. It is the opposite of a relationship.
Attributed to Oswald Mosley (1896 - 1980), British politician

What if, the 78-year-old lawyer, Harry M. Whittington, the man Cheney shot or as the

White House gang refers to it – peppered – had shot Cheney. I suspect that the White House would have immediately released the information.

Not only would the information have been released within minutes, but the incident would be used to rise the terrorist threat to bright red. Then Turd Blossom (aka Karl Rove), would swing into action and make up some crazy rationalization why Congress should unilaterally allow the president to continue spying on its citizens, least the terrorists take advantage of the situation.

Poor Whittington, who happened to have accidentally shot VP Dark Heart, would already be on his way to Guantanamo Bay, Cuba to find out who else was involved. His family would be shipped to one of the European torture camps to ensure there was no conspiracy.

The idiot president would show his loyalty and appoint Harriet Miers to fill in the wounded VP, meanwhile French surgeons from "new Europe" would be flown in for a possible face transplant, since the ol’ VP’s mug was pockmarked with iron pepper.

Donald Rumsfeld would hold a press conference to reassure us that stuff happens, but all was well, it is just the networks and the cable stations showing the same footage of the VP being shot that are creating the problem.

Well, it all goes back to the English newspaper headline after the election, “How can 93 million people be so stupid to have reelected this gang?
Posted by The Misanthrope at 12:02 AM 5 comments:

If You Must – Happy Valentine’s Day

The essence of romantic love is that wonderful beginning, after which sadness and impossibility may become the rule.
Anita Brookner, novelist, art historian

Everyone knows that it is Valentine’s Day. Just 51 days ago, husbands and wives, boyfriends and girlfriends all showed their love for one another on Christmas or during Hanukah, and now it’s required again? It all seems a bit silly to me, but than again I am single, so I’m obviously no expert.

Even while married, I found this pseudo holiday incredibly contrived and simply a way for Hallmark and florists to flourish. Maybe that was part of the problem. So to celebrate this Valentine’s Day I will watch the movie "Four Brothers" exact revenge for the death of their mother.

I am such the romantic. 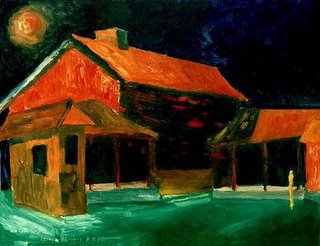 The above photo is titled "Drinking Alone."

Posted by The Misanthrope at 8:20 AM 5 comments:

A Bit Off Centered, for Now

Somehow, a bachelor never quite gets over the idea that he is a thing of beauty and a boy for ever!
Helen Rowland (1875–1950), journalist

I am on my own and it’s a whole new experience.

It’s taken me two weeks to finally get around to going grocery shopping. Once in the store, I really didn’t need that much. I purchased some cashews, a bottle of cheap red wine to go with the spaghetti I planned to have that evening. A case of bottled water because after two nights without any sparkling or regular bottled water, I vowed, as Scarlet O’Hara did in “Gone with the Wind,” as God is my witness, I shall never be without bottled water again. I purchased some microwave popcorn. A few cans of soup, which has become my dinner on most nights.

I have yet to cook anything and most likely it will be a while before I venture into that territory. My source of food has been my friend’s pizzeria. Get all my pick orders at half price. Mostly, I order minestrone soup, a side of meatballs and a slice of garlic bread. The pizza I have delivered on Friday’s.

Saturday, I dropped off clothes at the dry cleaners. I asked how much the shirts were to have cleaned and I was told $3.75. I was shocked and immediately called the ex and asked how much she paid. She didn’t know, she just paid it. I settled for having the shirts laundered for $1.75. But, if all they do is wash them and press them, then maybe I can do that. Once I buy an iron and ironing board.

My pictures are still situated on the floor around the place, because I need someone to help me hang them, otherwise everything will be off center and crooked.
Posted by The Misanthrope at 9:08 AM 5 comments:

Augustin knew temptation
He loved women, wine and song
And all the special pleasures
Of doing something
You'll never make a saint of me
The Rolling Stones “Saint of Me” written by Mick Jagger/Keith Richards

Here is my take on the Super Bowl: the game was sloppily played with Seattle 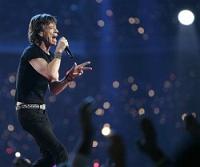 choking. They dropped passes that should have been caught and they were not thinking as passes that were caught the receiver was out of bounds.

However, I didn’t have a favorite and I had no money on the game, I just wanted to see the halftime show with The Rolling Stones.

I was not disappointed. Mick Jagger had the dance and the swagger turned up. However, and this is where the hypocrisy of the ABC network came into play. The editors of the halftime show cut a few words from the Stones’ songs. Here is how Associated Press described it:

Two sexually explicit lyrics were excised from the rock legends' performance Sunday. The only song to avoid the editor was "(I Can't Get No) Satisfaction," a 41-year-old song about sexual frustration.

In "Start Me Up," the show's editors silenced one word, a reference to a woman's sexual sway over a dead man. The lyrics for "Rough Justice" included a synonym for rooster that the network also deemed worth cutting out.

Now what is so silly is that the commercials where far more sexual with innuendos than the Stones song, if anyone could understand the lyrics.

I also have another bone of contention. The AP reporter obviously is not a Stones fan because he doesn’t realize that the whole Rolling Stones appeal is their very practiced ragged, rough performances.

Jagger, at age 62, is still a force of nature, strutting and dancing across a stage designed as a replica of their famed wagging tongue logo. The band's performance felt ragged _ they seemed just warming up during the opening "Start Me Up," and a three-song set affords no such luxury.

The Stones chose three tough rockers, including the best song from their well-received recent album and one of their most enduring hits.

"Here's one we could have done at Super Bowl I," Jagger wryly said in introducing "Satisfaction."

It was their best, most energetic effort, and ended with Jagger blowing a kiss to the audience. But unlike U2's performance four years ago at the Super Bowl, their set was not an example of a band at its peak rising to the majesty of the event.

Nonsense. The three song set was the Stones in top form, if you didn’t like that you are not really a Stones fan.
Posted by The Misanthrope at 6:25 AM 1 comment: