May your stuffing be tasty
May your turkey plump,
May your potatoes and gravy
Have nary a lump.
May your yams be delicious
And your pies take the prize,
And may your Thanksgiving dinner
Stay off your thighs!
~Author Unknown

Posted by The Misanthrope at 12:00 AM No comments:

Topics of Conversation at My Cousin's House on Any Given Holiday

By Jason Rohrbacker, courtesy of McSweeney's (where you'll find a cornucopia of hilarious Thanksgiving lists).

Whose house this is and how you'll act in it

Who is not here to win any popularity contests

Who is just plain ignorant

When this conversation is over

What is an argument and what is just a discussion

Whether Democrats or Republicans are closeted child-molesting homosexual Communists

Who is in charge here

How school is going

Who has had more than enough to drink

The more we sweat in peace the less we bleed in war.
Vijaya Lakshmi Pandit (1900-1990), diplomat and politician

Dear Veterans: I truly wish there was no need for your efforts. Sadly, too frequently, that is not the case, so thank you with much admiration. 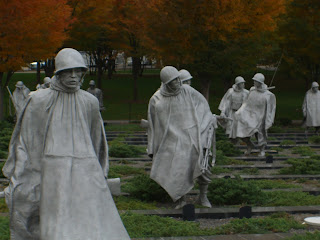 The Corner of Salvation and Damnation

At least two thirds of our miseries spring from human stupidity, human malice and those great motivators and justifiers of malice and stupidity, idealism, dogmatism and proselytizing zeal on behalf of religious or political idols.
Aldous Huxley (1894 –1963), writer

I was invited to attend a Christian Fellowship church that occupied a prime one-block piece of real estate on Centinela Avenue and Venice Boulevard. It also doubles as a coffee shop. I wonder if those profits are taxed? I normally would have politely declined, but there was some policeman from Fort Apache in the Bronx speaking and wife being from the Bronx knows the area well, so what the heck. Besides, attending a church for something other than a funeral mass would be nice. Afterward we’d go to Santa Monica and walk around.

I am a cynic, what can I say. I looked around the church and saw what I would describe as pious hypocrites and lonely people looking to belong. Good for them, I wish them all well.

Eventually the Christian band finished their set, the preacher starting talking and shoehorning every topic into something about or from God. He mentioned that Friday night was a special couples marriage discussion, I wonder if that includes married gay couples?

The cop was introduced and started his sermon with a story about his little lost soul as a kid and how he was rescued from his tough neighborhood and how eventually he saved someone. Most every sentence was punctuated with an amen at the end. It was all well and good, until the end when the converted cop said something about Jesus coming and saving people unlike Muslims or Hindus. Huh? Hold everything, did I just hear this ambassador of fellowship and Christ show his prejudice? Yes, I did.

I mentioned this to my friend; he had picked up on it too. But, it’s his church and he’ll just forgive the speaker.

Wife and I eventually headed toward Santa Monica, but I kept thinking that rather than add more of a financial burden on the backs of working stiffs (California just instituted a mandatory 10.23 percent state income tax), this country needs to start taxing the churches for income and property taxes, if they are going to preach their politics and prejudices. I have no doubt that the additional tax income will close some of the budget gaps around the country. Amen!
Posted by RJW at 6:54 PM 2 comments:

It features camels, singing a rewritten version of the Black Eyed Peas song, "My Humps" -- in tribute to Jesus. Please go see it here.

And consider this my early wishes to our Christian friends for a Merry Christmas.
Posted by B2 at 6:23 PM No comments: