Please Don’t Pray for Me

Pray (verb) -- to ask the laws of the universe to be annulled on behalf of a single petitioner confessedly unworthy.
Ambrose Bierce (1842–1914), author

I offer this news story with running commentary. The following is an excerpt from today’s New York Times article "Long-Awaited Medical Study Questions the Power of Prayer" using all combinations of my weak sense of humor such as sarcasm, hillbilly language (which probably is spoken more readily here in Los Angeles by so called educated people), and poor taste. 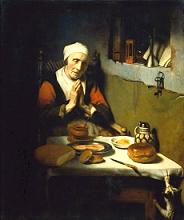 Prayers offered by strangers had no effect on the recovery of people who were undergoing heart surgery, a large and long-awaited study has found.
I ain’t having none of it. This story was written by one of those terrorist lovin’ New York Times’ reporter.

And patients who knew they were being prayed for had a higher rate of post-operative complications like abnormal heart rhythms, perhaps because of the expectations the prayers created, the researchers suggested.
This could give new meaning to the phrase: “I’m going to pray for you.”

Because it is the most scientifically rigorous investigation of whether prayer can heal illness, the study, begun almost a decade ago and involving more than 1,800 patients, has for years been the subject of speculation.
I don’t care how rigorous the investigation or irrefutable the evidence, because if god can create the earth HE most certainly can answer a prayer.

The question has been a contentious one among researchers. Proponents have argued that prayer is perhaps the most deeply human response to disease, and that it may relieve suffering by some mechanism that is not yet understood. Skeptics have contended that studying prayer is a waste of money and that it presupposes supernatural intervention, putting it by definition beyond the reach of science.
Note in this paragraph that the smart ones are called skeptics, soon it will be heretics, again. The reason this was contentious is because they were praying to find a believable answer so their prayers of winning the Nobel prize could be answered.

"One conclusion from this is that the role of awareness of prayer should be studied further," said co-author of the study Dr. Charles Bethea, a cardiologist at Integris Baptist Medical Center in Oklahoma City (and someone who feared for his life if he said there was no god).
Posted by The Misanthrope at 8:04 AM 5 comments:

Tone at the Top

People ask the difference between a leader and a boss. … The leader works in the open, and the boss in covert. The leader leads, and the boss drives.
Theodore Roosevelt (1858–1919), U.S. Republican president

The Wall Street Journal yesterday had an article on how Halliburton’s work in Iraq was so shoddy the government threatened to pull its no-bid contract if the company’s quality, integrity and cost of work did not improve.

Pentagon auditors questioned $45 million of the $365 million Halliburton received for the work.

The report stated: among the serious and persistent problems identified in the documents are repeated examples of apparently intentional overcharging, exorbitant costs, poor cost reporting, slipping schedules and a refusal to cooperate with the government.

The findings of the report prepared for Rep. Henry Waxman (D. Calif.) are the first to examine the company’s contract to restore Iraq’s southern oil fields.

The company of course dismissed the findings as partisan. So, basically it’s shorthand for what the company’s former CEO – Dick Cheney – tells colleagues in the Senate “Go fuck yourself.”
Posted by The Misanthrope at 8:19 AM 2 comments:

The Inner Game of Business...is understanding the Business Paradox: the better you think you are doing, the greater should be your cause for concern.
Mark McCormack, sports agent, promoter, and lawyer

I am not known as an optimist, so I won’t throw any one off by stating that I think many people will be major financial trouble in the coming months.

We have the new bankruptcy laws that no one is paying too much attention to at this point, but with interest rates up a quarter of a point to 4.75 percent, which means a number of home loans will rise for those who financed their new homes with adjustable rates and for those who have adjustable equitable loans (seconds taken out on their homes).

The government tells us that inflation is under two percent, not counting food or energy costs (somebody needs to tell me why those are not counted, especially since a large percentage of my cash goes to those two items). The New York Times article in today’s paper points out that this interest increase is the last rise before it leaves neutral territory. This means “after 15 consecutive rate increases, the cycle of monetary tightening is reaching its peak as interest rates approach what is seen as a "neutral" rate that is not so high that it slows economic growth but not so low that it allows inflationary fears to come back to life.”

But, what brings this piece home, so to speak, is that an article in yesterday’s Los Angeles Times about swindlers preying on those who cannot afford their

homes states that there was one foreclosure for every 1,223 households in Los Angeles. Now, throw in a terrorist attack or a natural disaster such as an earthquake and people are going to be in big trouble. We know what a help FEMA is! People will not be able to walk away from their homes as they used to. The new bankruptcy law states that one has to pay back loans and debts unless one is penniless with no income.

Trouble is brewing.
Posted by The Misanthrope at 12:04 AM 3 comments:

To be remembered after we are dead, is but poor recompense for being treated with contempt while we are living.
William Hazlitt (1778–1830), English essayist

I was driving to work yesterday listening to Janis Joplin and the lyrics to her song “Mercedes Benz” and it occurred to me why the religious right is so popular. It's because they are all praying for and preying on others and surprisingly they are scoring.

The quote above seemed rather apropos to my thoughts about the religious right or left.

Here is a sampling of Joplin’s song in case you have forgotten it.

Oh Lord, won't you buy me a Mercedes Benz ?
My friends all drive Porsches, I must make amends.
Worked hard all my lifetime, no help from my friends,

So Lord, won't you buy me a Mercedes Benz ?

Posted by The Misanthrope at 8:16 AM 3 comments:

A character's monologue from Richard Morgan's novel Market Forces, updated a little to be more appropriate for the present (as opposed to looking back from the future):

Do you really think we can afford to have the developing world develop? You think we could survive the rise of a modern, articulated Chinese superpower? You think we could manage an Africa full of countries run by intelligent, uncorrupted democrats? Just imagine it for a moment. Whole populations getting educated, and healthy, and secure, and aspirational. We can't afford these things to happen. Who's going to make our shoes and shirts? Who's going to supply us with cheap labor? Who's going to buy our weapons?

An educated middle class doesn't want to spend eleven hours a day bent over a stitching machine.They aren't going to work the seaweed farms and the paddy fields till their feet rot. They aren't going to live next door to a fuel-rod dump and shut up about it. They're going to want prosperity. Just like they've seen it on TV.

When complaints are freely heard, deeply considered and speedily reformed, then is the utmost bound of civil liberty attained that wise men look for.
John Milton (1608–74), poet 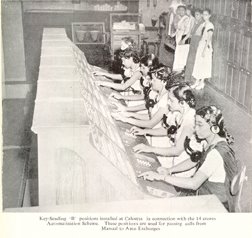 Whenever I call a company whose service I am using, I get an automated operator who (that) informs me how unusually busy the company is answering other calls, then I get to hear the advertising of all their products. Eventually I am told the call will be monitored. My hope is that they begin monitoring the call from the time I am placed on hold, so they can hear how long their customers are holding. Also, if it is always so unusually busy, why don’t they get more operator? Outsourcing is cheap there should be no excuse.

Actually, I am not sure which is worse, someone who can't help or a recording that is no help.
Posted by The Misanthrope at 7:38 AM 5 comments: 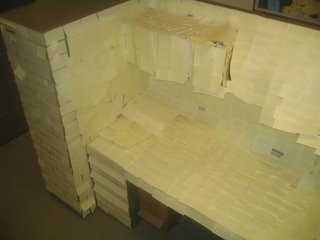 We greeted a co-worker returning from a long absence by decorating his cubicle with post-it notes. 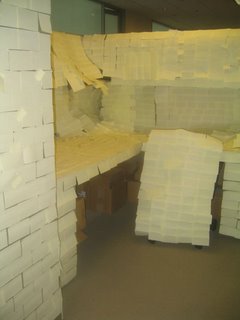 It's cliche, but I think the labor involved justifies a little bit of pride in the accomplishment.
Posted by B2 at 3:41 AM 7 comments:

My wife is on the phone right now with another rabbi, and just said to her, "I had to look something up in the penis book today."

She is now claiming there's a book written by some guy named Shlomo Penis, but I tried Googling it and got nothing.