“Real luxury is time and opportunity to read for pleasure”
Jane Brody, author

This is the time of year that I review all the books that I read through the previous year. This year I hit a personal high of 17 full books read.
Last year’s reading started with “Last Night Twisted River” by John Irving, which To paraphrase and take out of context, New York Times book critic Michiko Kakutani, called this book a deeply felt and often moving story. In my notes about the books I read, I wrote this about Irving’s novel – It was a one family saga that at times was very moving. Pay attention to the first sentence – I do recall thinking about the story for a while I after finished it, which is always a good sign for me.
“The Humbling” by Philip Roth. Roth is an amazing writer. He is credibly smooth story telling. This is another story of an aging male, this one an actor, who realizes he lost his magic. I rather enjoyed it. 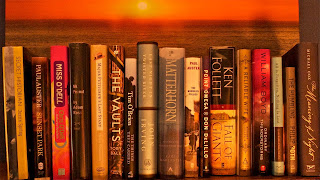 Posted by The Misanthrope at 8:59 AM 7 comments: