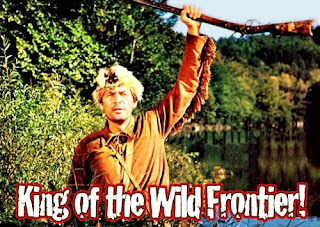 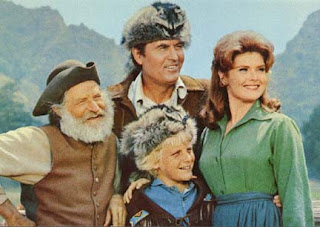 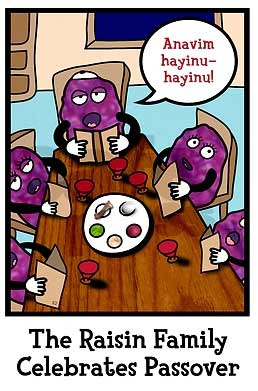 Time to make a buck, if I can -- this time, by selling hilarious Passover stuff! After all, why bother having a blog if you can't use it to shamelessly promote your goods and services, right? First though, because I know that explaining a joke makes it even funnier, here's the explanation (for those who may stop by this blog but not be up on their Hebrew language skills):

The cartoon predicates itself on the knowledge that at Passover we sing "Avadim Hayinu" -- translated as "we were slaves." When the Raisin family celebrates Passover, they sing the very similar-sounding "Anavim Hayinu" -- translated as "we were grapes." Get it? Hilarious! Trust me -- your rabbi will be in stitches. And it comes with a Hebrew caption or one in English transliteration (as shown above).

Well, maybe it's funny only to those of us Hebrew language geeks who think it's amusing to say "Hodu l'adonai" on Thanksgiving (someone can explain that one in the comments section if they want to).

So what can you buy with this great cartoon on it? Lots of stuff, and all right here: greeting cards, tote bags, shirts, mouse pads... But buy early, so that you get your goods before Passover!
Posted by B2 at 2:08 PM No comments:

Why Dodger Ticket Prices are Rising

Ms Dodger half owner (Jamie McCourt) listed her expenses and asked the court for $988,845. Here are some of her MONTHLY expenses: