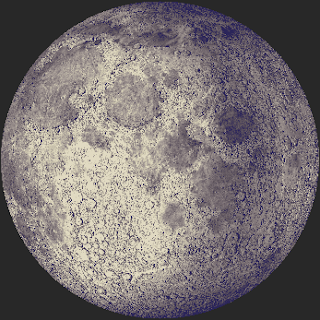 Dick Gordon of Apollo 12 was asked what did we learn from going to the moon. He replied, "we discovered the Earth.

Forty years ago today, Apollo 11 was the first manned mission to land on the Moon. It was the fifth human spaceflight of Project Apollo and the third human voyage to the Moon.

On July 20, Armstrong and Aldrin became the first humans to walk on the Moon, while Collins orbited above. 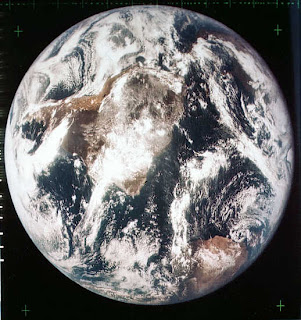 In this July 1969 file photo, most of Africa and portions of Europe and Asia can be seen in this spectacular photograph taken from the Apollo 11 spacecraft during its translunar coast toward the moon, during the month of July, 1969. Apollo 11 was already about 98,000 nautical miles from earth when this picture was made. (AP-Photo/NASA, file) moon0714a

1. The Apollo’s Saturn rockets were packed with enough fuel to throw 100-pound shrapnel three miles, and NASA couldn’t rule out the possibility that they might explode on takeoff. NASA seated its VIP spectators three and a half miles from the launchpad.

2. The Apollo computers had less processing power than a cellphone.

3. Drinking water was a fuel-cell by-product, but Apollo 11’s hydrogen-gas filters didn’t work, making every drink bubbly. Urinating and defecating in zero gravity, meanwhile, had not been figured out; the latter was so troublesome that at least one astronaut spent his entire mission on an anti-diarrhea drug to avoid it.

4. When Apollo 11’s lunar lander, the Eagle, separated from the orbiter, the cabin wasn’t fully depressurized, resulting in a burst of gas equivalent to popping a champagne cork. It threw the module’s landing four miles off-target.

5. Pilot Neil Armstrong nearly ran out of fuel landing the Eagle, and many at mission control worried he might crash. Apollo engineer Milton Silveira, however, was relieved: His tests had shown that there was a small chance the exhaust could shoot back into the rocket as it landed and ignite the remaining propellant.

6. The "one small step for man" wasn’t actually that small. Armstrong set the ship down so gently that its shock absorbers didn’t compress. He had to hop 3.5 feet from the Eagle’s ladder to the surface.

7. When Buzz Aldrin joined Armstrong on the surface, he had to make sure not to lock the Eagle's door because there was no outer handle.

8. The toughest moonwalk task? Planting the flag. NASA’s studies suggested that the lunar soil was soft, but Armstrong and Aldrin found the surface to be a thin wisp of dust over hard rock. They managed to drive the flagpole a few inches into the ground and film it for broadcast, and then took care not to accidentally knock it over.

9. The flag was made by Sears, but NASA refused to acknowledge this because they didn’t want "another Tang."

10. The inner bladder of the space suits—the airtight liner that keeps the astronaut’s body under Earth-like pressure—and the ship’s computer’s ROM chips were handmade by teams of “little old ladies.”

Craig Nelson uncovered these facts in various NASA archives while researching his new book, Rocket Men (Viking; $28).
Posted by The Misanthrope at 12:01 AM