A Crime Against Humanity in the U.S. Receives Praise from Residents

Mankind, when left to themselves, are unfit for their own government.
George Washington (1732–99), U.S. president. 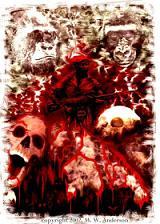 think about Gretna, Louisiana. This is a city that won’t make it to anyone’s or any magazines’ best of anything list.

The city of Gretna is the parish seat of Jefferson Parish, in the state of Louisiana. Gretna is on the west bank of the Mississippi River, across from uptown New Orleans. It is part of the Greater New Orleans Metropolitan area. As of the 2000 census, the city had a total population of 17,423.

Flooded out of their homes, seeking help, and human kindness the confused and desperate residents of New Orleans walked in mass by the thousands toward a bridge that could take them away from the rising flood waters that drowned New Orleans after Hurricane Katrina. These people who had lost everything were welcomed by-- a sight that would make an thinking individual ashamed to be apart of the same species -- Armed police shooting over the group's heads and used dogs and shotguns to control the on coming crowd. They were turned back by men with rifles and dogs.

Let’s take a closer look at this quaint town that will only serve as a breeding ground for extras in the remake of Deliverance:

"We did right. We protected our citizens," said Gretna police Chief Arthur Lawson

According to the St. Petersburg Times there are many signs throughout the caring town that read, "Thank you and God Bless Chief LAWSON & Gretna PD." Many residents, black and white, support the chief.

Maple Malone, a 39-year-old black woman who has lived in Gretna since 1974, said she appreciates what Lawson did. "The question you needed to ask those people on that bridge is, are you really coming here for comfort, or are you coming here for trouble?" Malone said.

Robbie Mundell, 33, said he chose to live in Gretna because the police keep him safe. "I can leave for the weekend and keep my door open and not get robbed," said Mundell, who is white. "It's the last peaceful town around New Orleans."

I keep my doors unlocked most the time where I live in Southern California, too. It’s a rather simple premise, there is nothing for them to take.

As one blogger posted (the article did not provide a name, which is rather cheesy), what Gretna and its police did was a crime against humanity. I couldn’t agree more and they should be prosecuted for it.
Posted by The Misanthrope at 12:17 AM

Are the chief's comments getting any coverage in the mainstream media, or are bloggers alone in seeing a story here?

I had heard about this weeks ago, but it wasn't clear at the time what was going on. The chief's comments make it clear: he knowingly condemned hundreds of people to death on the assumption that they might loot his town.

I'd say the comments are worthy of front-page treatment, but maybe it's viewed as yesterday's news.
Q

I read about it in Saturday's newspapers, but I also heard another story on it today on NPR this morning on the way to work.

The chief is blaming New Orleans for sending them, but that was the most immediate way out of the flooding.

And now there's even MORE coming. I'm not trying to sound cruel but it makes you wonder, is it worth rebuilding there?

I think it is very important to ensure that it is rebuilt properly and not on the cheap. Otherwise, it's certainly not worth it.