Chávez Ravine – A CD Regarding the Land Dodger Stadium Sits On

If property had simply pleasures, we could stand it; but its duties make it unbearable. In the interest of the rich we must get rid of it.
Oscar Wilde (1854–1900), playwright 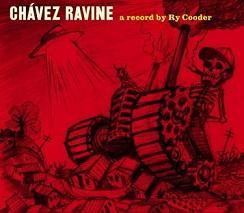 Chávez Ravine is the home of Dodger Stadium. Prior to Walter O’Malley leaving Brooklyn and Ebbets Field, Chávez Ravine was home primarily to poor Mexican and Mexican American residents. The area was designated for a federal housing project, which as always had liberals and conservatives fighting, and as usual, the conservatives resorted to name calling, accusing those not supporting them as being communists. It seems that providing O’Malley with a sweet deal to bring the Brooklyn Dodgers to Los Angeles, served as some sort of compromise.

Chávez Ravine is a new CD by Ry Cooder. This release came to my attention through an outstanding story written by Lynell George. George is one of the best features writers at the Los Angeles Times. She is very descriptive, accurate and I have found her tastes run along a similar line as mine.

Her article in the May 1, 2005 issue of the Times was a 3,800-word piece on Ry Cooder’s latest. I like Cooder because he used to play on a number of Rolling Stones songs that was until Mick Jagger and Keith Richard ended up subconsciously borrowing the main notes for Honky Tonk Woman and not giving any credit to Cooder. Heck, Jagger didn’t even give his own band member Mick Taylor credit for coming up with the bridge on the song, which that and other incidents made Taylor leave the band. Cooder moved on from the Stones, and many know him best for the critically acclaimed Cuban project, "Buena Vista Social Club."

As George wrote, Cooder spent almost two-years in this ambitious musical assemblage, steeped in collaboration with seminal artists from L.A.'s Latin music scene. The tracks are recorded, the liner notes written (by journalist Ruben Martinez). The record, he hopes, will be a 360-degree exploration of a neighborhood -- in texture and mood. Its palette -- a melange of styles: corrido, jazz and pop, conjunto and some shades of R&B -- is as diverse and hard to pinpoint as Los Angeles itself. 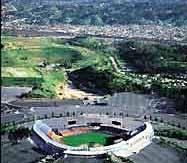 I love the Chávez Ravine CD because of my once love affair with the Dodgers. As I drive around the stadium everyday to and from work, I view the area entirely differently today knowing a bit more about its history. I had known about a deal worked out with the city, but I didn't realize homes were torn down and bulldozed like an African village. It is a real shame that the federal housing project was not built there. The hilltop is destined for homes someday again. The speculation is the new Dodgers' owner will build condominiums where the stadium sits today, and move the stadium near Staples Center.
Posted by The Misanthrope at 12:01 AM