The Misanthrope – Sunday’s Lighter Side

Total physical and mental inertia are highly agreeable, much more so than we allow ourselves to imagine. A beach not only permits such inertia but enforces it, thus neatly eliminating all problems of guilt. It is now the only place in our overly active world that does.
John Kenneth Galbraith, economist

Vacation. Those five days I had planned to take to stretch out a long weekend was extended to 16 days. I started adding a day here and a day there and decided there was no sense in interrupting a vacation with a day of work here and a day of work there. Now until July 10 I can relax, read, clean up around the house, catch a few movies, barbeque, and watch baseball games. Unfortunately, the days will fly by and when I return to the office I will have forgotten I even had time off.

Reading. I am reading the latest book by Bruce Wagner, "The Chrysanthemum Palace," which the New York Times’ book critic Michiko Kakutani writes:

As readers of Bruce Wagner's earlier novels well know, his Hollywood is an American Babylon, a stinking, sin-riddled cesspool, an unholy magnet for narcissists, egomaniacs, exhibitionists, climbers, stalkers, sycophants, control freaks, fame addicts, celebrity codependents, spiritual hucksters and a mad bevy of predators eager to exploit others' dreams, neuroses and vulnerabilities. The perfect backdrop, in short, for Mr. Wagner's caustic satire and sad-funny-scabrous meditations on vanity, mortality and loss.
So far it’s enjoyable and we’ll see once I finish how well I like this book. Next up will be Umberto Eco‘s illustrated novel “The Mysterious Flame of Queen Loana.”

Stuff Happens. Daughter and I saw David Hare’s play “Stuff Happens,” which as Hare says in the Author’s Note “Stuff Happens is a history play, which happens to center on very recent history. The events within it have been authenticated from multiple sources, both private and public.” 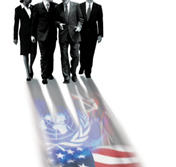 It was an outstanding production all the way around. It was three hours, but the time flew by. Hare wrote the play in such a way that the major milestones leading to war are both entertaining and interesting. The sad part is that so much of the play is crafted verbatim from the lies out of the mouths of the Bush gang, which frighteningly demonstrates what mad men are running this country currently. The play highlights the preconceived notions they had to attack Iraq. The terrorist attacks just made it easy for them to execute their war.

The following three quotes will only serve to further highlight the liars in the White House:
Posted by The Misanthrope at 12:06 AM

Hey! What do you know! I have a vacation coming up too. Only mine is for like 65 days or so.:)

By the way, everytime you leave your blog address in my comments, it's wrong. I just thought I'd let you know in case you didnt know.:)

I can only dream of so many days. That is a wonderful perk teachers receive.

I went back and checked the URL and it worked for me.

Yes, it's nice to have time off, hey? I am now over the busy season; July and August I only work about half time; and in August I have two whole weeks off. Of course, I don't paid for ANY of my vacation time, but as it's about the only downside of working for yourself, I can live with it.

Enjoy your time off.

Thanks, Pirate. Time off is so important especially considering how hard most people work today just to keep their heads above water. The day-job is rather generous with its time off policy I still have plenty of time thank goodness. Enjoy your part-time summer, I am sure your piano playing will progress nicely during that time.

I've used all my vacation/sick time up for the year, by about early May, usually. sigh..