Live 8 and U2 Changing the World

Our society is run by insane people for insane objectives. … I think we’re being run by maniacs for maniacal ends … and I think I’m liable to be put away as insane for expressing that. That’s what’s insane about it.
John Lennon (1940–80), rock musician 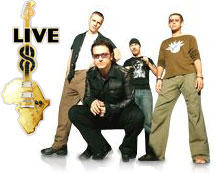 Rock & Roll has changed the world just not the way it was envisioned. The young people of the 1960s did not enter politics and rearranged the world or the United States specifically. Even the more revolutionary realized that you have to appeal to an apathetic middle ground that is often satisfied with the status quo. Change has to come subtly similar to how one would steer a boat not ski a slalom course.

The Live 8 concerts that will broadcast on July 2, when dozens of major pop acts grace stages across the world from Tokyo to Toronto to London to Philadelphia and beyond, play live to raise awareness of Africa’s problems of poverty and disease.

The timing is to coincide with the Group of Eight world leaders meeting in Scotland on July 6-8. I heard portions of Bono’s interview on Meet the Press on Sunday and was most impressed that he understands the political process well enough to use his fame to the same way a lobbyist uses special interest money to make a difference. Bono who for several years now has been meeting with one political leader after another has succeeded in eliminating the debilitating debt of Africa to industrial countries.

You can see the effects ever so slowly from politicans who always seek attention and want to attach themselves to the latest cause, if it is not controversial. According to the New York Times, the day after his nomination as head of the World Bank was announced, one of the first people Paul Wolfowitz called was Bono ... twice. Months later, rich nations announced a deal to wipe out over $40 billion of impoverished nations' debts which aid groups and lobbyists believe was partly thanks to Bono and fellow Irish rocker Bob Geldof, who is organizing Live 8.

“We have a unique power in this ridiculous thing called celebrity, and our job isn't finished when we write songs that grow out of concerns,'' Bono said.
Posted by The Misanthrope at 12:02 AM

I'll be attending this Live 8 thing, in Philadelphia. I'm not looking forward to it in the least (other than the fact that I'll be safe on the roof of a closeby building, at a friend's party, rather than in the sweaty masses) and I want to see virtually NONE of the performers. Furthermore, I'm very skeptical of whether they'll be able to accurately disseminate the requisite information necessary in a forum such as a rock concert. I'll keep an open mind, however, and will also keep an open eye searching for mention of the trade iniquities that are prolonging and exacerbating the deep problems facing Africa (not least of which are federal farm subsidies to US farmers... and I'm not sure our citizens will be prepared to authorize a reduction in those, potentially ushering a new-school dustbowl type situation)... If I see adequate coverage of the more obscure problems facing that continent, I'll be a little less annoyed with it. Furthermore, if I see an effort to illustrate the extremely complex interactions between international policies (trade, military, etc.) and how they lead to these various economic situations, I'll be doubly impressed and surprised.

Bono, by the way, is one of the few cause-rockers I've seen who truly puts his money where his mouth is. He's done far more than any other outspoken proponent of any particular cause in my opinion. I'm not familiar with what Geldof's done personally, but I know he own a great percentage of stake in a TV corporation, whose shares spiked considerably directly following the announcement of the Live 8 concerts. That alone makes me extremely skeptical. If this initiative has any financial repercussions for anyone directly involved, I will be upset.

Devo, you know the media nor the politicans will get into the details. The purpose of these concerts as I understand it is to shame the G8 leaders into sending additional money to Africa. I think you have set the bar too high, which normally is not a bad thing, but in this case even baby steps are good.

I agree that I often expect far too much from my world, but in this case, if the concert succeeds in simply more money being thrown at theproblem, it will be nothing more than a very loud waste of time. More money = more guns for warlords. Also, we often calculate the total amount of money given in aid by including the approximate value of food aid we include. In order for Africa to stabilize its collective economy and begin to build a viable infrastructure and start making its own prosperity, one thing it needs to do is start growing and exporting rice. It has very little incentive to do this if it's being sent subsidized American rice.

But you are also correct in that baby steps are better than nothing... I'm just very frustrated with the fact that for every baby step taken, we will probably end up taking two baby steps backward.

I agree that Bono is one of the few rock stars who has credibility when it comes to "causes." Bono didn't just pick a pet cause, rather, he's been doing this sort of thing ever since the beginning. It's who he is, and being a rock star just helps him gain visibility. I also love that he realizes that being a rock star is a silly idea anyway.

They might not achieve widespread awareness of the problem, but they will inform quite a few people who never would have thought or heard about these issues before. Honestly, much of the public is immune to news and politics.